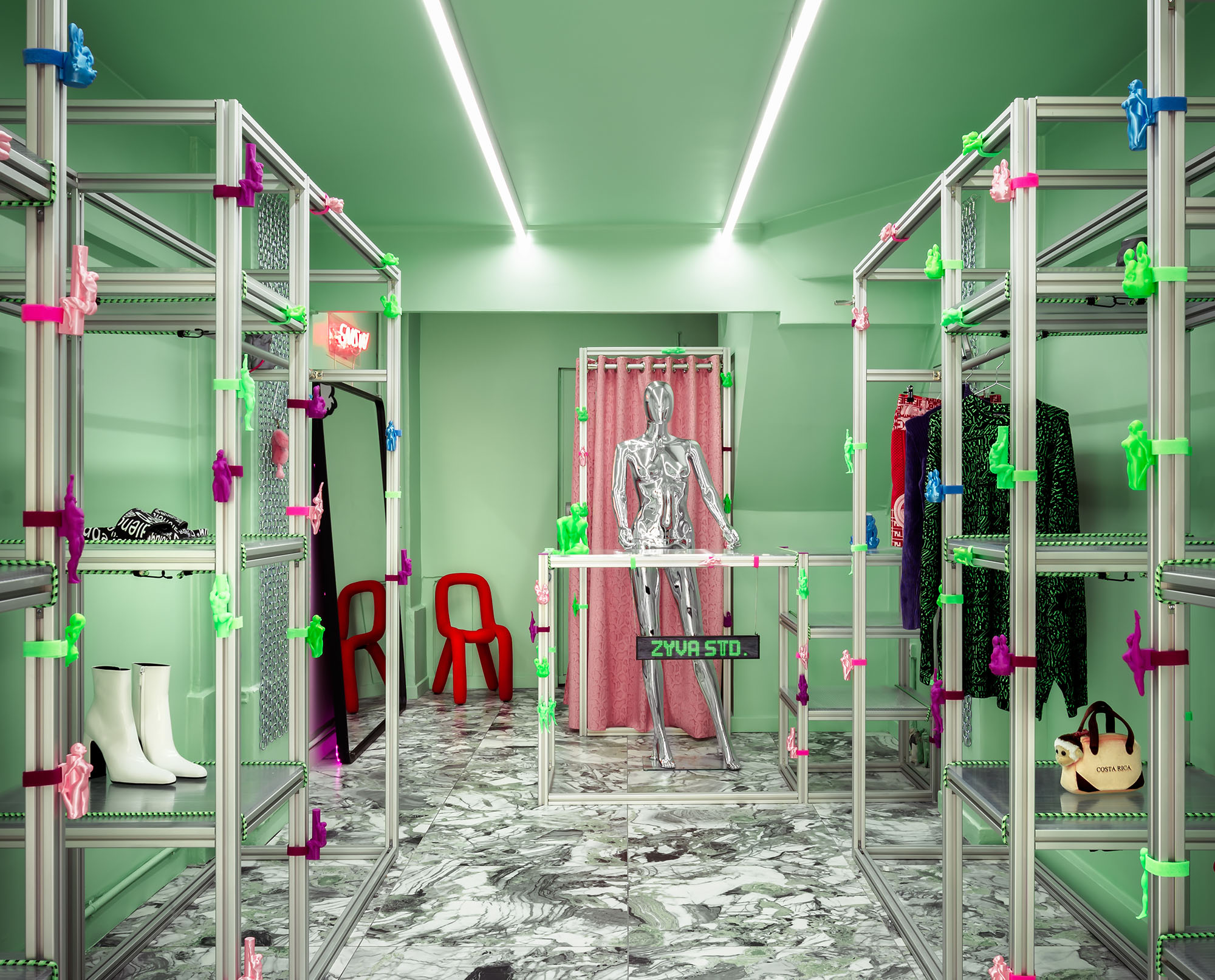 With the rise of the metaverse, how is your work evolving in terms of the objects and spaces you design?

In recent years, I have the feeling that we are witnessing an explosion in architecture, in a good way. There is no longer really a predefined style. Everything is mixed and mixed: modernist, brutalist, rococo, futuristic, organic, grunge, cyberpunk, minimalist, maximalist, small scale, large scale. Our era offers a stage for all those who wish to express themselves and this movement accentuates the emergence of the metaverse. A virtual space in which anything is possible will inevitably generate a series of innovations in the way we live, represent and inhabit the city. But as the Japanese roboticist Mori Masahiro’s Uncanny Valley theory, it will be necessary to cross this “gray zone” in which progress, made towards human imitation, will first lead to more rejection, but beyond a certain threshold. of realism, to greater acceptance.

Can you develop your concept of “trans-design” and the relationship between body and architecture?

During my [studies], I was strongly influenced by the composite aesthetic of mythological and transhumanist creatures such as the minotaur or the cyborg. In my practice of design and architecture, I always try to question the inevitable relationship between a body and its environment. In my 2019 essay “Muscle”, I first broached the notion of trans-design by analyzing the similarities between bodybuilders and architecture. To build means to erect, to create something. Strength training is all about building muscle and strengthening the body. By practicing weightlifting, these athletes build a new body like armor and this shell acts as a shelter. In other words, it is a membrane in which we live. And like architecture, it acts as an interface between the body and the environment.

These bodies are often found in my work. Sometimes very literally, when they become an integral part of the furniture, replacing the base or the seat. Although the concept of the body in architecture is not new (think of the caryatids used as pilasters on Ionic buildings), what strikes me as interesting in virtual space is that these bodies can contort endlessly, be endowed with supernatural force, be composed of various robots or mechanical elements – the skin can become soft like cotton or shatter like glass. Thus, depending on its use, the body in virtual space can allow us to change the perception we have of it.

What has been your experience with NFTs?

With Architoys, we worked with Charlotte Taylor to empower people to collect unique architectural concepts. Materialized in a capsule the size of AirPods, the idea was to create a small tradable object almost like Pokémon cards. But also to create a real container in which we could find all the documents related to a project (plans, 3D files, description of the work, etc.). This will allow collectors to really build their architectural project or even integrate it on land purchased in a Metaverse. Beyond their direct functions, Architoys aim to protect the virtual projects of architects and 3D artists by freezing them in an era and a market. The capsules form a “time capsule” by protecting the documents of the architectural project.

The concept seeks to raise the question of the ownership of images on the internet. Once posted on social networks, the images travel endlessly and seem to escape their creators. Unlike completed projects whose authorship can be checked more easily. Architoys has a certificate of authenticity like an NFT.

I also create a series of cutlery based on the main principles of trans-design. They are half-man / half-spoon, half-woman / half-knife hybrids. I play with scales and references to mythology and the 90s. It reminds us of the myth of Sisyphus or the gift spoons hidden in cereal boxes. These will be cast in bronze.

How do you see the relationship between fiction and architecture in your work?

In The disobedience of the architect, Renzo Piano says that “Architecture is not only the art of constructing buildings, it is also the art of telling stories. I take this literally and use writing as another tool for doing architecture, especially novel. Whether it’s my drawings, my texts, or my architecture, I consider myself a storyteller.

Unfortunately, today the rules and regulations are so restrictive that the architect is often reduced to a designer of “facades”. We are surrounded by so many rules that we must provide a profitable and pragmatic response and can hardly fully explore the creative dimension of this profession. The Romanesque form is a way of exploring a type of architecture free from any injunction.

The virtual also allows us this kind of approach. By playing with scale, color, gravity, we can create dreamlike worlds that suggest a metaphysical rather than a pragmatic experience. My latest interior design for a retail space, Snow Bunny, attempts to illustrate this by taking inspiration from Lewis Carroll Alice in Wonderland. Populated with chimerical figures printed in 3D, the space is an ode to the surrealist imagination where pop culture and monsters happily coexist.