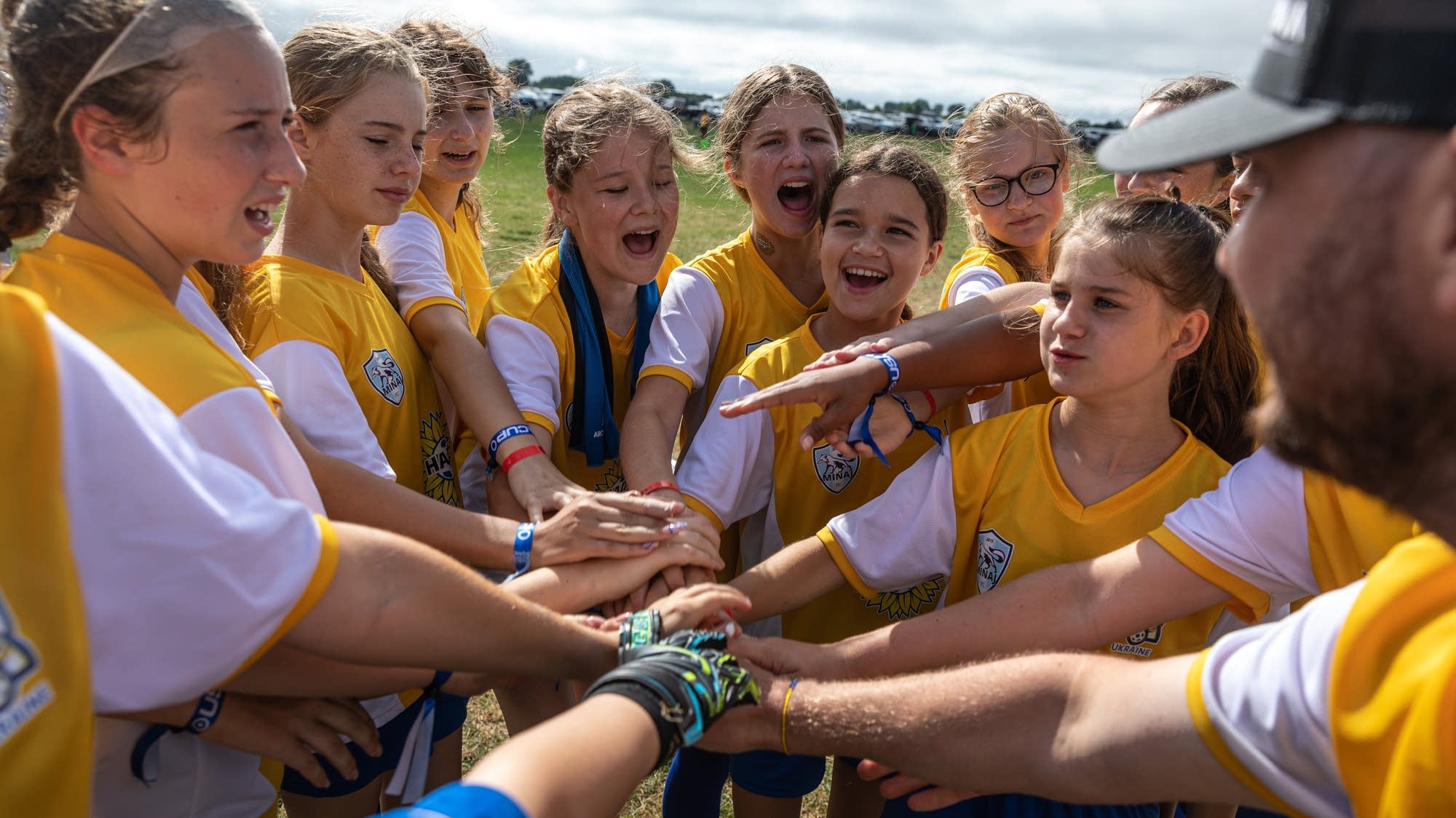 Among the thousands of young Minnesota soccer players for the US Cup tournament this week are a few dozen Ukrainians – children on war leave back home.

They are here not only to play along, but also to raise awareness of their country’s ongoing struggle months after Russia launched its latest military action against Ukraine.

“The war is not over, we still need help and supplies,” said 13-year-old Solomia Lesnik.

Aid worker Jess McAnuff helped put together a team of girls and escorted them to the tournament at the National Sports Center in Blaine.

“We are trying to raise awareness that the war continues in Ukraine,” she said. The players, McAnuff said, are in the Twin Cities to play football but also to say “they need help and they want to let (people) know that their fathers are still in Ukraine, they always beat”.

While delivering this message, Ukrainian teenagers experienced all kinds of new things. For better or worse, 13-year-old Taisiya Bibikova and the other girls have embraced American junk food.

“In Ukraine, we ate only salads, vegetables – natural and healthy foods,” she said. “But now we eat pizza, fries.”

The Ukrainians – there is also a boys’ team – have become popular among athletes from the Twin Cities for this week’s soccer tournament as they trade temporary team tattoos and commemorative pins.

Some of the girls also struggled with sore feet and blisters, as they worked to find the right fit among donated football cleats.

A day earlier this week, the women’s team faced off against a team from Lakeville – the Minnesota players wearing hair ribbons in the blue and yellow colors of the Ukrainian flag, to show their support for their guests.

The father of 13-year-old Ellie Tjaden coaches the Ukrainian women’s team, in which she also plays. She said she had heard devastating stories from her new friends.

“One of their schools was bombed. And some of their families, like they had to move and they couldn’t be together. And it’s really sad,” she said. “I don’t know how many of them can still be so happy and smiling, because it’s really sad to hear about it.”

Ellina Lesnik is the mother of 13-year-old Ukrainian footballer Solomia.

“Most of them were exposed to war and bombings,” she said of the Ukrainian teenagers. “So I think for them to experience something good and positive – that’s a wonderful thing.”

And Lesnik said her daughter and Ukrainian athletes are doing important work helping to keep Ukraine in the news.

“In the early days of the war, in February, in March, everyone was asking so many questions,” she said. “Now there is silence. But every day, every day, people have been killed, even today. Putin hopes the world will forget about this war.

On another court, a team of mostly 16-year-old Ukrainian boys took out a Chicago club in a game that was far more competitive than cordial.

Sam Tadele plays for a team in the Twin Cities area that hosted some of the Ukrainian boys for the week. He said the language barrier was difficult – but it’s clear the guys from Ukraine know what they’re doing

Most of the boys in the Ukraine team have been playing together for several years and have been through the war in neighboring Latvia. Their coach, Rudolf Balazhinec, said it was a gift for his players to be welcomed so warmly in Minnesota.

“It’s healing from their trauma, and they can dream of football again,” he said.

Andrii Katsuk, 15, came straight from Ukraine to join his refugee team and couldn’t be happier.

Katsuk will soon be back in Ukraine. But he and the other young athletes come away with something hard to come by for average Ukrainian citizens. Each now has a 10-year US visa – and many hope to return to this country to further their education and start building their careers.

After the US Cup ends on Saturday, Ukrainian soccer players and their coaches have several events planned in Minnesota.

Organizers said they plan to “run children’s soccer clinics and youth soccer matches, share personal stories about the challenges of fleeing war and living far from home as refugees, and to raise funds for humanitarian and medical aid, as well as personal protective equipment for Ukrainian citizen-soldiers.”

The events – which will also feature Ukrainian dance, music and art – include:

François Champsaur: how do you create living design?