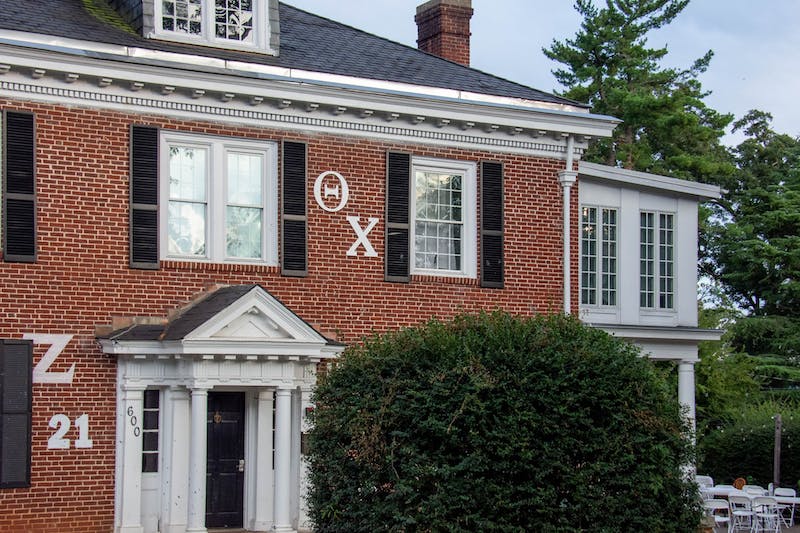 A collage painting dedicated to the deceased brother of the brotherhood Otto Warmbier was stolen from the Theta Chi brotherhood home at 600 Preston Place on the night of September 22, the brothers say.

Warmbier was a member of the Theta Chi fraternity and an Echols scholar from the University who intended to graduate in May 2017. In December 2015, Warmbier visited North Korea as part of a group of tourists. After accusing him of attempting to steal a political banner, the government arrested Warmbier and sentenced him to 15 years of forced labor in North Korea. Warmbier spent 17 months in prison until June 2017, when he was released and returned to the United States unconscious, suffering from severe loss of brain tissue. Warmbier died on June 19, 2017.

Theta Chi’s brothers described the painting as a collage of 3-by-3-foot panels of geometric shapes. The artwork was located in the hallway on the second floor of the chapter house of Theta Chi. At the base of the painting was a plaque that read “Dedicated to our friend Otto Warmbier”.

Third-year student Boby Yadzi says Theta Chi keeps Warmbier’s story alive through the fellowship. A section of the Chapter House is dedicated to his time at the University, including a large steel plate located outside the garage where Warmbier lived.

“Each new pledge class is told Otto’s story and the significance of his death in the story of our chapter,” Yazdi said. “When alumni come to town who were active brothers during his time in the fellowship, they always describe him as a caring and intellectually keen man.”

According to Yazdi, it is difficult to determine exactly when the theft took place. The brothers suspect this happened on the night of Wednesday, September 22 – the day before they noticed he was missing.

Third-year student Ray Ruhlmann noted that the chapter believes that whoever took the painting entered the house uninvited.

“I understand that thefts of this nature are not uncommon, composites are often seen by non-members as some kind of prank, but that’s different,” Ruhlmann said in an emailed statement to Cavalier Daily. “Whoever took this paneled collage actively disrespects the legacy of a man who lived and cherished U.Va. until his life was cruelly taken from him by a barbaric authoritarian state.

Ruhlmann said the Theta Chi brothers feel guilty for leaving such a meaningful painting beneath them and are saddened that part of Warmbier’s legacy has potentially been lost.

“The more time has passed since his death, the less the U.Va will enter. community understands Otto’s story and the cruelty of his internment, ”Ruhlman said. “If the painting is not returned, I fear that we will lose the little pieces of his legacy that our fellowship still has, and his memory will continue to fade among the U.Va. Student Council.”

Ruhlmann said the Theta Chi brothers are demanding that the painting be put back safely on their lawn or front door, adding that they are not seeking revenge on whoever took it. The fraternity reported the theft to the Charlottesville Police Department on September 28. James Mooney, deputy head of the CPD, confirmed that a report has been filed and that the investigation is currently underway.

“I understand that you probably made this mistake in a moment of stupid compulsion, and you probably regret what you did,” Ruhlmann said. “This is your opportunity to step up and correct your mistakes. You don’t even need to identify yourself. This work of art does not belong to your apartment, it belongs to the Theta Chi brothers.