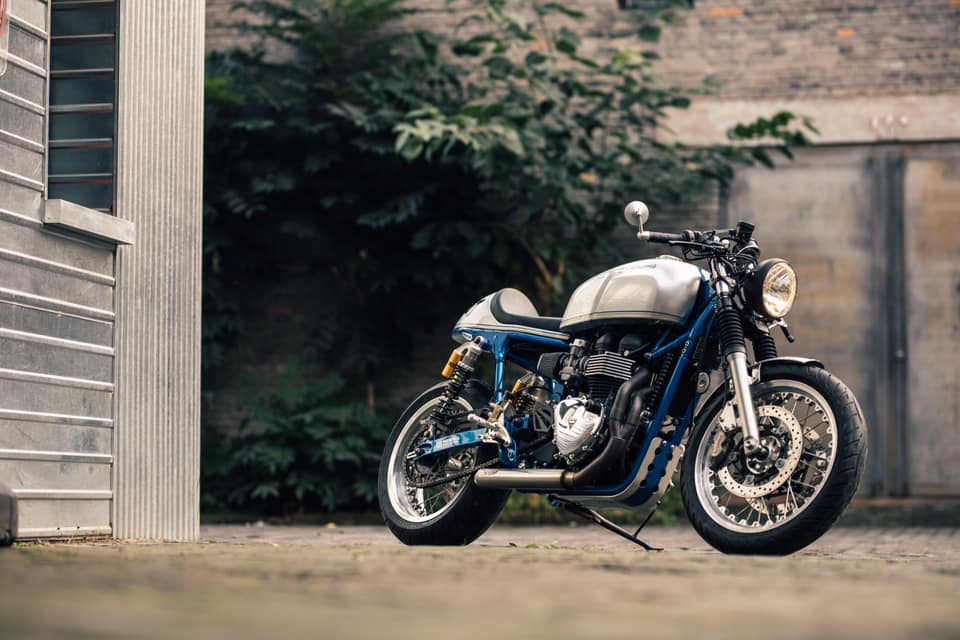 By Robert M. Holtz Last updated Oct 30, 2021
0
Share
Almost 120 years have passed since Johann Schulte designed the very first Triumph motorcycle, which used a 2.25 hp Minerva engine and bicycle frame. When the Great War broke out in 1914, the British were already assembling around 4,000 civilian bikes a year, and another 30,000 copies of the H-Type Roadster with military specifications were delivered to Entente forces during World War I.

After the conflict ended in 1918, Triumph’s annual production numbers continued to rise, reaching around 25,000 units by the end of the 1920s. In 1937, the Coventry-based manufacturer launched the iconic Speed ​​Twin – a 500cc, 27hp predator developed by Edward Turner, weighing just 361 pounds (164 kg). Needless to say, these machines were extremely advanced for their time, and thousands of examples were ordered by law enforcement in London.

With World War II at the gates of Britain, Triumph opened a new factory in Meriden to meet the growing demand for combat motorcycles. A total of 50,000 copies were produced for military use between 1939 and 1945. As we move quickly through 1955 we find Johnny Allen setting a land speed record of 193 mph (310 km / h) at the Bonneville Salt Flats in Utah, where he piloted the legendary “Devil’s Arrow” powered by a modified Triumph 650cc mill.

Three years later, Edward Turner’s revered Triumph Bonneville T120 made its debut at the Earls Court Motorcycle Show, with the first production variants arriving at dealerships for the 1959 model year. Despite the painful decline of the company in the mid-1970s, the Bonneville nameplate simply refused to be abandoned for good, so a new incarnation emerged from the company’s headquarters in Hinckley in 2001.

Today, the Bonnie is still very much alive, with several upgrades and liquid-cooled engines with 64 or 79 ponies à la carte, depending on the finish. However, the custom wonder we’ll look at below started with an air-cooled Bonneville T100 from the Triumph lineup, which was serviced by the Chinese Motorcycle Shamans at Luo Hao’s Mandrill Garage in Beijing.

To begin with, the specialists at Mandrill removed the standard bodywork from the bike in its entirety, along with the handlebars, airbox and exhaust. With those items scrapped, the crew began to unlock a little more oomph by installing a set of free-flowing K&N air filters and a neat two-in-one exhaust system from Zard. To ensure that the new components will work smoothly, a ECU a remapping was also done.

Then the original wheels were dropped to make way for lighter aluminum alternatives from Kineo’s inventory, carrying high-quality Roadtec Z8 rubber developed by Metzeler. When it comes to the creature’s bespoke outfit, the Bonneville sports a slim front fender, seamless padding and unique alloy gas chamber with SportClassic vibes, as well as a cafe racer-style tail section made by hand that rests on a revised frame.

A healthy dose of extra stopping power is made possible by premium front brake discs and Brembo four-piston calipers. Up front, the original telescopic forks – which are held in place by CNC-machined triple clamps – have been rebuilt using an assortment of premium interiors, while the rear suspension setup was honored with state-of-the-art shocks from Ohlins. Bonnie’s cockpit is fitted with Motogadget’s groovy Chronoclassic gauge and a new pair of LSL clips, with bar end mirrors, Brembo levers and Domino grips.

Motogadget experts are also responsible for supplying the m-Blaze indicators that flank the headlight. As we look back, we’re greeted by bolt-on footrests, LED turn signals, and an aftermarket chain guard. For the finishing touches, the swingarm and the steel tube frame of the head tower have been covered with a tasty coat of blue paint. The body was wrapped in a silver base, which is accompanied by a blue stripe that runs from the front fender to the tail.

Bloodborne 2 could be in Bluepoint’s hands, and that’s a good thing