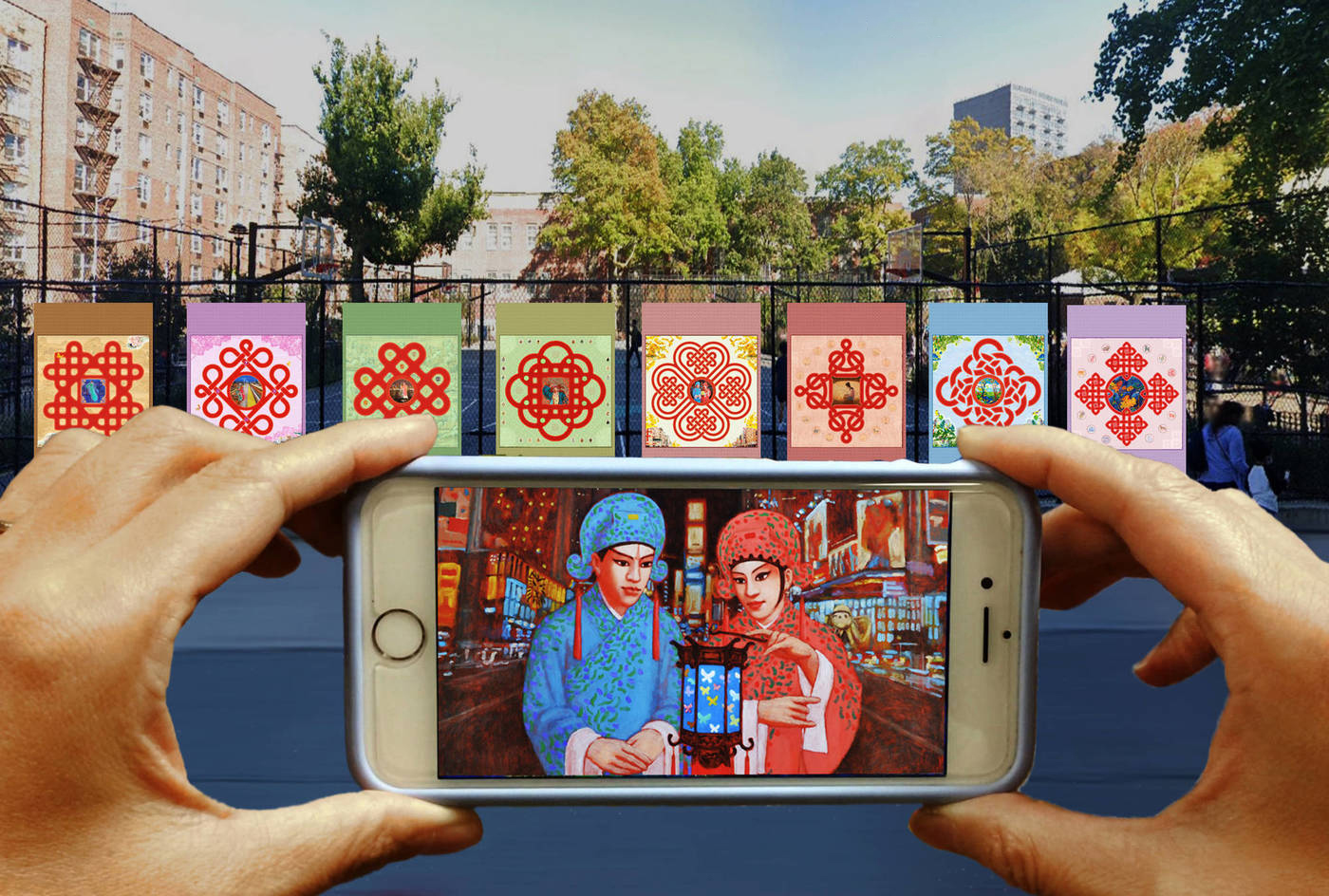 Scan these works and they will come to life

Through December, visitors to two Chinatown parks in Lower Manhattan and Flushing will find a series of banners emblazoned with large Chinese red knots, a hallmark of the cultural districts in which they find themselves. Looking closer, they will find at their center brilliant scenes blending contemporary and traditional symbolism and storytelling. And if they choose to scan a QR code at the bottom of the banner, the images will begin to come alive with operatic tales of love, struggle, resilience and tragedy.

The displays, mounted on fences at Bowne Playground in Flushing, Queens, and Columbus Park in Manhattan, are splashes of color that invite residents of surrounding neighborhoods to engage with Chinese heritage, tales of immigrants and the modern reinterpretation of outdoor folklore. The series is called The red string and is the work of the artist duo Lily & Honglei – consisting of Lily Yang, who works primarily with augmented reality (AR), and Honglei Li, who specializes in oil painting – with support from More Arts, a non-profit organization whose mission is to produce socially engaged public art in New York City.

At the heart of each of the eight banners, measuring six feet by four and a half feet, is an image taken from an animation. The short videos are inspired by images from Honglei Li’s oil paintings, and their narrative structures are inspired by East Asian folk tales and opera stories.

An animation is a retelling of the ancient legend of “butterfly loverswhich Yang calls “one of the most beautiful, popular and influential Chinese folk stories”. Two young college students, one female and the other male, meet on their college trip and become close friends. Soon they fall in love. But the story ends in tragedy: she has already been entrusted by her family to another man, and devastated, her lover dies. She joins him in death, and only then can they unite in spirit, like butterflies moving away from the earthly world.

“We loosely reinterpret this story to depict a couple in traditional opera costumes, wandering around New York City at night,” Yang told Hyperallergic. “The contrast between the characters and metropolitan landscapes, such as Times Square, Station 7 in Queens, and the Brooklyn Bridge, visualizes the cultural isolation they experience and the long journey that leads them to a new identity.”

Another banner, titled “The Stereotype: The Lives of the Invisible”, pays homage to the countless lives led by Lao Liu, a friend of Lily & Honglei. The animation uses a large scale oil painting series as source material, and was motivated by Honglei Li’s own experiences both as a sidewalk artist in Times Square and as a witness to the difficult lives and deaths of people he knew. Liu held several diverse jobs, including at an upstate vegetable farm, nail salon, restaurant, and on a construction site. When he was chased by police for working in construction without a permit, he was brutalized and ended up with a broken hand. Unable to continue working in construction, he began collecting bottles and cans from the streets for recycling. “That’s the last thing we knew about him,” Yang said. “We lost it.”

A priority in Lily & Honglei’s artistic practice is to uplift people whose stories have been obscured. “There aren’t many works of art depicting their lives, either their actual living conditions or their spiritual work,” Yang says, referring to people like Liu. “It’s always overlooked.”

Yang sees the augmented reality component as a way to engage people in the community without forcing them into the privileged spaces of arts and cultural institutions. It’s a medium the duo have worked with for over a decade, and with this installation, the hybridization of the physical and digital worlds is seamless: visitors don’t need to download an app to view the animations, and can access it with the built-in QR scanners in their phone cameras.

“It’s something we always want to do: break down the boundaries of gallery or museum walls, and communicate directly with the public, in parks and neighborhoods. It’s the audience that really excites us,” Yang said.

Dylan Gauthier, curator of More Arts who helped organize The red string, sees the installation as a response to rising hate crimes and violence. But, he added, “animations themselves seek to uplift and draw us into a place of beauty through greater cultural understanding and solidarity between new and old.”

When to plant the Christmas tree? Exact date revealed