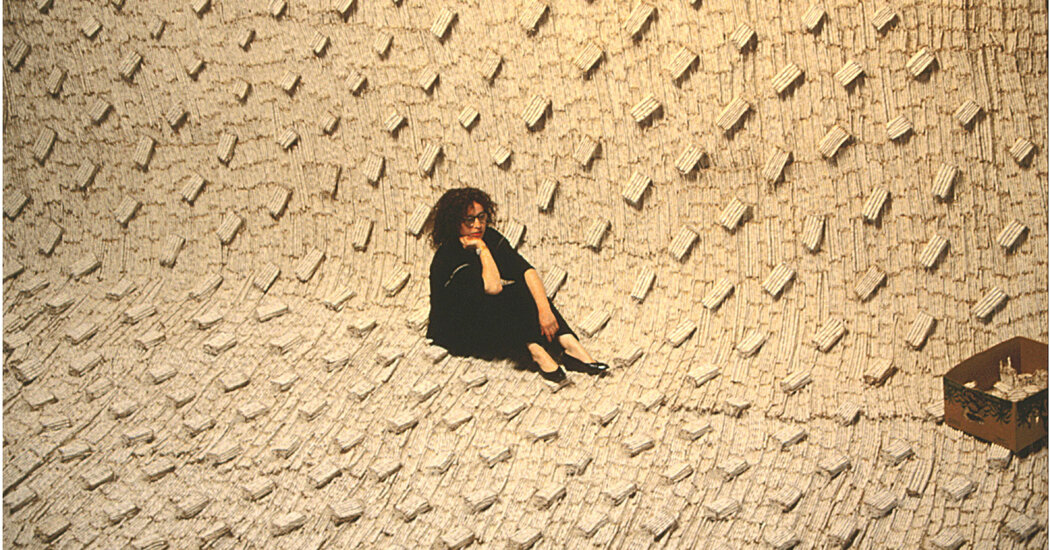 Ritzi Jacobi, a European pioneer of contemporary textile and fiber art, best known for her monumental wall hangings and soft sculptures, died on June 19 at her home in Düsseldorf, Germany. She was 80 years old.

The death was confirmed by her husband, Heinz Possert, who did not specify a cause.

Ms. Jacobi’s enormous textile creations were made of a variety of fiber materials ranging from cotton to goat hair. Although his work bears some resemblance to traditional tapestry, he pushed the form into modernist and abstract realms.

She “had a huge impact on the field of crafts and art,” said Jane Milosch, former curator of contemporary crafts at the Smithsonian American Art Museum.

Warren Seelig, professor emeritus at the University of the Arts in Philadelphia, who organized an exhibition of her work in 1994, said that while Ms Jacobi was often described as a “fiber artist”, her work was not easily categorized.

“She was probably one of the very first truly interdisciplinary artists, mixing all sorts of things,” he said. “She was not a myopic weaver. She worked broadly, with paper and metal and cloth and fiber and goat hair – all that sort of thing. In the end, it was his tapestry that was really provocative and innovative.

Victoria Areclia Gavrila was born on August 12, 1941 in Bucharest, Romania, to Nicolae and Marieta Gavrila. Her father worked for the railroad and her mother was a housewife. (She was nicknamed Ritzi, a short form of the Romanian diminutive of Victoria, Victoritza.)

Her early childhood was marked by the turmoil and deprivation of World War II, said Ms. Milosch, who conducted a five-hour interview with Ms. Jacobi for a Smithsonian oral history project in 2010.

“She didn’t have any traditional toys growing up, not even a teddy bear,” Ms Milosch wrote in an email. Instead, “she was intrigued by ‘playing’ with her own clothes, and started taking them apart early on, studying them inside out – so sort of her first foray into textile work. .”

Although Ritzi grew up in Bucharest, the capital, she often visited relatives in the countryside, where she began to experiment with natural materials.

Encouraged by her parents to explore her budding creativity, she excelled in drawing and painting in primary and secondary school. She was accepted to the Institutul de Arte Plastice in Bucharest, now known as the National University of Arts in Bucharest, to study applied arts.

Ritzi arrived there in 1961, and she soon met Peter Jacobi, a sculpture student four years her senior. “She was in her first year and I was in my sixth, so we spent a year together,” Mr. Jacobi said in an interview. “We became a couple that year.”

Within a year of graduating, Jacobi took a job in the Romanian town of Craiova, where traditional Turkish weavers had been making rugs, or kilims, from goat hair since the Empire. Ottoman, he said.

When the couple first started collaborating on artwork, goat hair was one of their favorite materials. They married in 1966.

Romania became a communist country in 1947 and Ms. Jacobi’s school years coincided with the rise to power of Nicolae Ceaușescu, who would become the nation’s dictator in 1968, turning it into a totalitarian state.

“It was not an easy time for artists,” Ms. Jacobi’s German art dealer Volker Diehl said in an interview. The Jacobis chose to work in fiber and textiles, at least in part, he said, because “the art censors didn’t take that kind of work seriously, and so they could work without any censorship and without any pressure”.

Their work follows the long Romanian folk tradition of weaving, which has produced lushly colored tapestries and rugs. But while borrowing from this heritage, the Jacobis produce weavings that are more akin to sculptural reliefs, retaining the natural colors of the materials, including cotton, untreated cardboard, sandpaper, sisal, coconut fiber and graphite.

American Craft magazine credits the Jacobis with introducing goat hair to contemporary textile art. And art historians recognize their work as part of the “new tapestry” movement, carried by a group of artists working with traditional craftsmanship, among them Magdalena Abakanowicz from Poland, Jagoda Buić from Croatia and the Americans Lenore Tawney, Claire Zeisler and Sheila Hicks.

“Their work is really part of a phenomenon of that moment in 1968 when all of these art forms were booming,” Ms. Milosch said. “But theirs was very specific as a very monumental tapestry. Their rooms were so large that they would command wonder, and they would engulf you, as they were also very organically architectural.

In 1969, the Jacobis exhibited at the International Tapestry Biennial in Lausanne, Switzerland. A year later, they were invited to represent Romania at the Venice Biennale.

After receiving a special visa to leave Romania to attend this art fair, the couple defected to Germany. “Like many other artists and writers, they made that choice,” Ms. Milosch said, “but it was a tough choice because it meant cutting themselves off from their family.”

The Jacobis worked closely together for almost two decades. Mr. Diehl said people often assume that Mr. Jacobi is the creative force behind the couple, but in fact it is often the other way around.

Their first major solo exhibition in the United States was at the Detroit Institute of Arts; he then traveled to several other venues, including the Los Angeles County Museum of Art.

The couple’s marriage and creative partnership ended in 1984, the same year they had an exhibition at the Musée d’Art Moderne de la Ville in Paris and the Galerie Nationale D’Art Textile in the French town of Beauvais.

Ms. Jacobi works from then on as a solo artist.

“She was thriving,” Ms Milosch said. She was “pushing much of the work they had created together in even farther directions.”

In 1994, Ms. Jacobi was the subject of a solo exhibition, “The Impulse to Abstract: Recent Work by Ritzi Jacobi”, organized by the Rosenwald-Wolf Gallery at the University of the Arts in Philadelphia.

Professor Seelig, who organized the exhibition, recalled that at that time “she was practically blind”.

“She was wearing coke bottle lenses,” he said, “and she wasn’t very verbal, but she was making these massive pieces, and it took a lot of focus.”

“Her surfaces almost burst naturally, they blistered, they looked so natural, and it was because of the way she played with tension and compression,” Professor Seelig said. “It really came from the thought that his hands were doing touching the material.”

His last gallery exhibition, “Edge of Darkness”, took place at Diehl Gallery in Berlin in 2019.

In addition to Mr. Possert, Ms. Jacobi is survived by her brother, Dr. Florian Gabriel, a doctor.

Farewell to the Millennium Hotel in Buffalo, New York