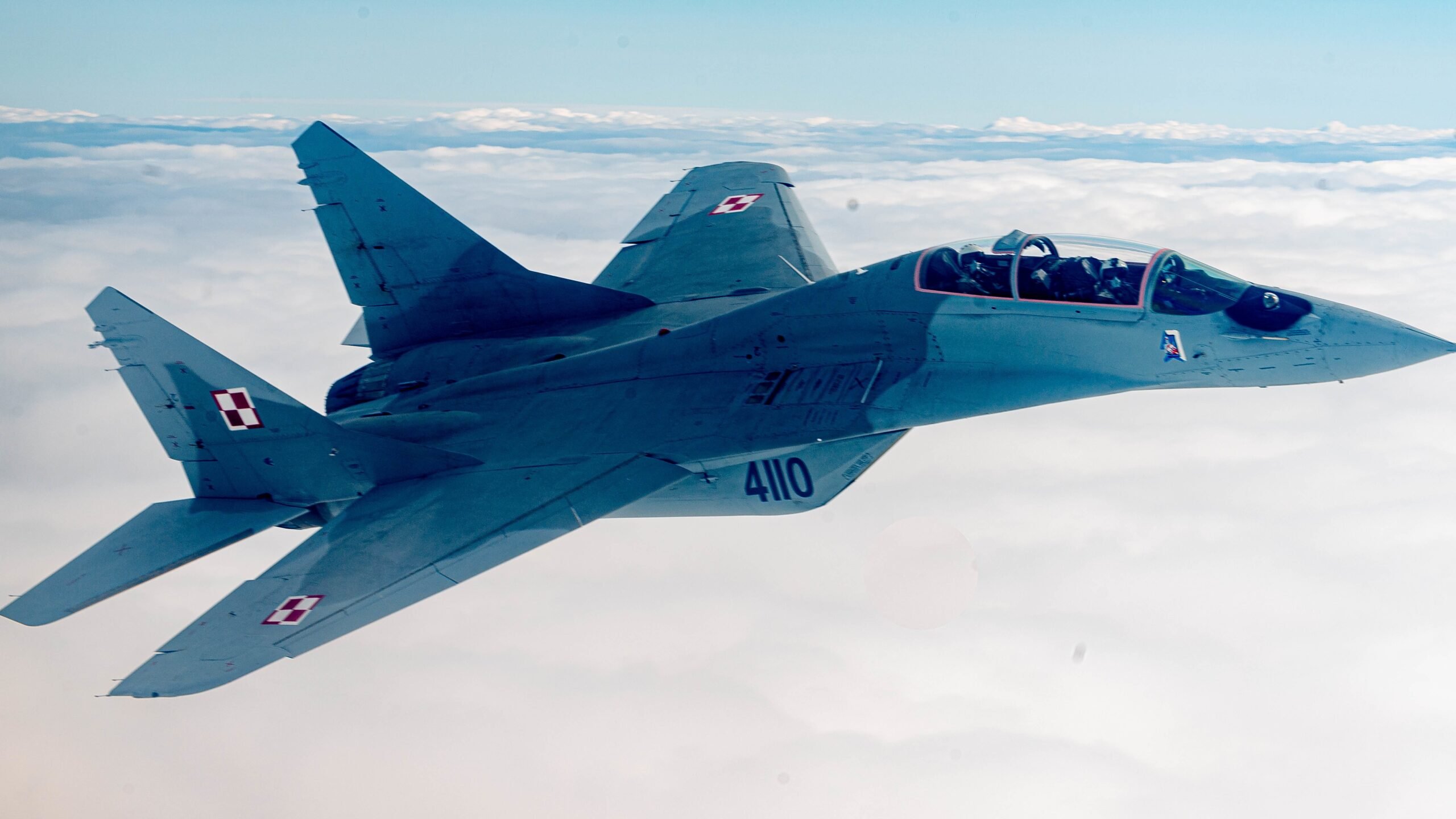 A Polish Air Force MiG-29 jet fighter is captured in a photo from September 21, 2021 (US Air Force/Edgar Grimaldo)

WASHINGTON: After several days of talks surrounding a fighter jet swap that would see Poland give its fleet of MiG-29s to Ukraine in exchange for American F-16s, Poland announced today that it will was ready to give the planes to America and let Washington then transfer them to Kiev.

The problem: It seems no one in the US said so, and after hours of confusion, a statement from the Pentagon effectively shut the door on the plan.

The Polish announcement, published in english on a government website on Tuesday afternoon, said that “the authorities of the Republic of Poland, after consultations between the president and the government, are ready to deploy – immediately and free of charge – all their MIG-29 aircraft on Ramstein Air Base and make them available to the Government of the United States of America.

“At the same time, Poland is asking the United States to provide us with second-hand aircraft with corresponding operational capabilities. Poland is ready to immediately establish the conditions for the purchase of aircraft. The Polish government also asks other NATO allies – owners of MIG-29 jets – to act in the same direction.

The announcement was followed by a surge of excitement online that a deal had been struck to secure much-needed aviation assets for Ukraine, a cause that had been taken up by Ukrainian supporters around the world and in the US Congress. But the fact that the statement indicates that Poland is “ready to deploy” the planes, and that no announcement from the US government immediately accompanies it, raised red flags.

The first official response came from a senior defense official who simply said, “We have seen the announcement from the Polish government. We have nothing to offer at this time. A more definitive opinion came from Victoria Nuland, Under Secretary of State for Political Affairs, who was testifying before the Senate Foreign Relations Committee shortly after the announcement was released.

In response to a question about Poland’s statement, Nuland said: ‘I saw this announcement from the Polish government as I was literally driving here today. To my knowledge, we have not been pre-consulted that they were considering giving us the planes… I look forward to going back to my office and seeing how we will respond to this proposal from them, to give us their planes.”

Asked later in the hearing to clarify that the Polish offer was uncoordinated, Nuland said: “Not to my knowledge. I was in a meeting where I should have heard about it just before I came. So I think it was actually a surprise move by the Poles.

The confusion continued later in the day, after Polish Prime Minister Mateusz Morawiecki said any decision on delivering offensive weapons to Ukraine had to be taken unanimously by NATO members. . And hours after the announcement, the Pentagon released a statement calling the complex deal described by Poland “unsustainable.”

“The prospect of fighter jets ‘at the disposal of the government of the United States of America’ departing from a US/NATO base in Germany to fly into disputed airspace with Russia over Ukraine raises serious concerns for the entire NATO alliance. It is simply not clear to us that there is substantial justification for this,” the statement said, noting that the proposal “just shows some of the complexities that this issue presents.”

At least one key NATO ally might prefer the potential fighter swap to be better guarded.

Speaking today at a Center for a New American Security event, France’s defense chief, General Thierry Burkhard, said that “we must” supply arms to Ukraine. But, he said, it needs to be done in a “reasonable way” — less public.

“The support from European countries and NATO is something that needs to be done, but not necessarily communicated,” Burkhard said through a translator. “So we shouldn’t over-communicate about it.

“The Russians can accept a number of things, but they cannot accept that we overestimated our support for Ukraine,” he said later in the event. “The less we can say, the more we can do.”

How would The Fighter Deal work?

Even before the Pentagon nearly killed Poland’s proposal, there were legal questions about how the United States could accept a gift of nearly 30 Russian-made fighters from Poland. A precedent for such a deal, where the United States accepts a gift of arms from another country, was not immediately apparent, nor is it clear what legal method the United States would use to transfer these weapons to Ukraine.

“It creates a bit of bureaucracy ‘can we even do this kind of thing,'” Max Bergmann, who served in the State Department from 2011 to 2017, including as senior adviser to the assistant secretary of state for Political Affairs – Military Affairs, said before the release of the Pentagon statement. While noting that he couldn’t think of anything comparable in the past, Bergmann said that if the United States was interested in pursuing the plan, “I guess we can probably find a way.”

Bergmann, now with the Center for American Progress, said he thinks the confusion over today’s actions stems from the fact that Polish leaders created a “political problem” for themselves when early talks of a stock exchange planes have become public.

Probably, Warsaw “looked at the potential escalating impacts of transferring these planes from Polish airfields adjacent to Ukraine, and thought, ‘Yeah, that puts a target on us, and that’s an escalation. And they don’t know how to back down, how to get out of it,” Bergmann said. “They don’t want to appear soft on Russia and their audience, so they just tried to push this issue back to the United States.”

Then there are questions about logistics – how the planes would get to Ukraine without being shot down by Russian air assets, where they would be based, who would fly and maintain them, how Ukrainian pilots would get to Germany to take control of the planes and, not to mention how quickly the United States could fill planes to Poland.

Nuland noted that a key part of any deal in which Poland gives up its aviation assets would be to ensure that it “still benefits from the full air security of the NATO alliance”, this is where that US jet fueling would come into play.

Based on the Warsaw declaration, Poland is ready to accept older F-16 models, as opposed to new aircraft. This opens up the next question of what exactly “matching operational capabilities” means. Based on upgrades made by Poland in the mid-2010s, this comparable capability would appear to be somewhere between a block 30 and a block 40/42—capabilities most readily available in the Air National Guard—with systems compatible European navigation devices installed.

But given the surprise on the US side and the Pentagon’s stark assessment, the question remains open as to how or if a fighter swap plan plays out.

“Sometimes you pitch ideas, they get pursued, they get flagged, people get excited and then at the end of the day you say, ‘This won’t make any sense,’” Bergmann said. “I feel like that’s where we’re headed. Everyone got excited. Everyone has overshot their skis a bit. In the end, the important thing is to make the right decision about what to do.