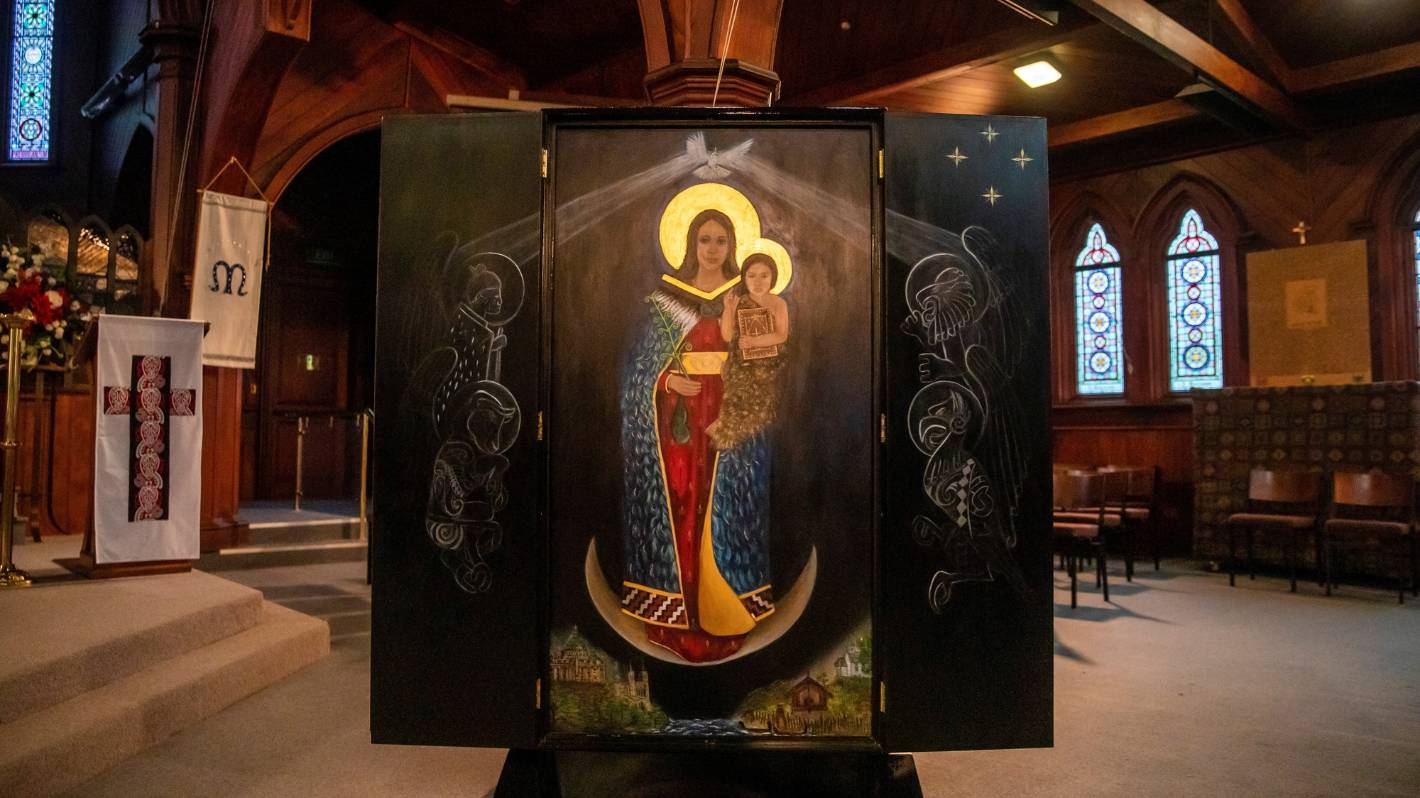 A unique artwork of Madonna and Child visited Blenheim and Kaikōura on its tour of the country.

The work was commissioned by the New Zealand Catholic Bishops to celebrate the rededication of Aotearoa New Zealand to Mary during a special Mass at St Mary of the Angels in Wellington on August 15 last year.

Puwhakarite Māori Apostolate Coordinator Korty Wilson, from the Diocese of Palmerston North, brought the work to Marlborough on the ferry on Friday on her hikoi to share the painting with parishes across the country.

During a special Saturday morning mass at St Mary’s Catholic Church in Blenheim, Wilson said the church had received many inquiries about the country’s dedication to Mary in response to the disruption and distress caused by the Covid-19 pandemic.

However, many did not know that the country had already been dedicated to Mary in 1838, during the first mass held by New Zealand’s first bishop Jean-Baptiste Pompallier, a French missionary who settled in Hokianga.

It was hoped that last year’s rededication would be a source of help and comfort, and the artwork aimed to present Mary in a way that connected her to New Zealand and represented the arrival of Catholicism. .

Workshop of Saint Philomena owner Damien Walker, an award-winning artist who helped restore churches and religious art after the Christchurch earthquakes, worked closely with Anthony Te Keepa and the runanga to draw authentic Maori elements into the painting.

“They wanted to portray a Maori woman, but so that everyone who saw the image would see it, because Aotearoa is for all walks of life,” Wilson said.

Among the symbols highlighted by Wilson were Mary’s pukeko feather korowai coat, with a golden band of linen, and her robe decorated with the fleur-de-lis, one of the most ancient symbols of the Holy Trinity.

She wore a rosary and a simple as his tools against evil, and raised his hand wiriwirias if you were calling a karanga to welcome, while Jesus, dressed in kiwi feathers, carried Pompallier’s prayer book.

The four evangelists were represented as kaitiaki on the outer panels of the triptych, which closed in the center to protect it during the trip.

Wilson said she was very happy to hear the anthem Ka Waiata ki a Maria chosen for the mass because the composer, the late Richard Puanaki, was also part of the Rūnanga Catholic Church which commissioned the artwork, before he died last year.

After prayer, communion and a reading from the Acts of the Apostles, people gathered to take pictures with the painting.

Father Michael McCabe said it was a very special and spiritually significant visit, in the weeks leading up to the Assumption of Mary.

The Christian observance of Mary’s ascension into heaven was marked every August 15, and McCabe said that with church services, it could be marked in the same way as Matariki, as a time for family and sharing the Kai.

The painting was due to remain at the Takahanga Marae in Kaikōura over the weekend, before returning to Blenheim on Monday to be shared with St Mary’s School, and could be viewed by the public in the Mercy Room.

The artwork would return to St Mary of the Angels to become part of a national shrine at a dedication ceremony on August 14.