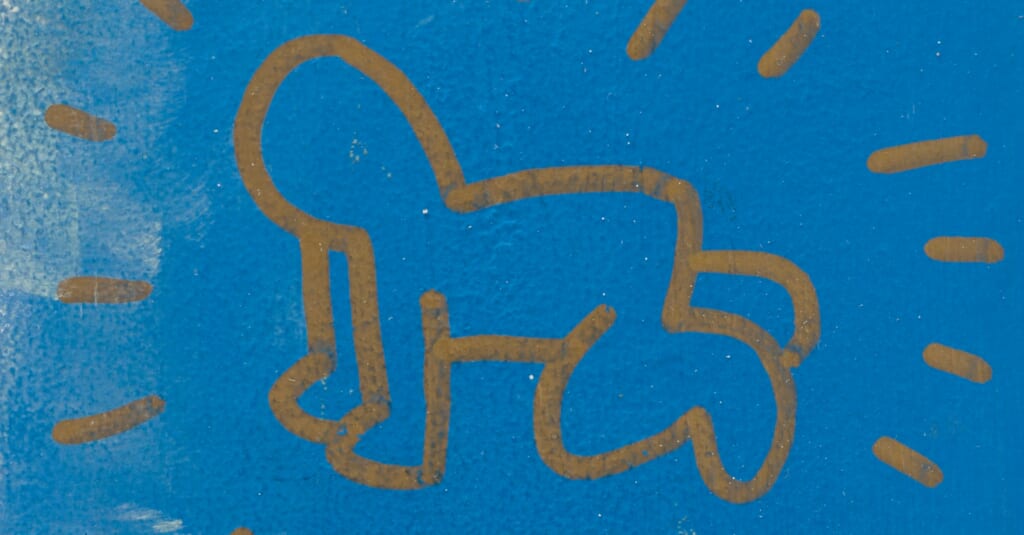 The one-of-a-kind design was cut from the famous artist’s childhood bedroom in Kutztown, Pennsylvania.

An original drawing by Keith Haring, cut directly from the royal blue walls of the artist’s childhood bedroom in Kutztown, Pennsylvania, will be auctioned at Rago/Wright headlining their Post-War and Contemporary Art auction on September 14.

Almost Lost to History and Home Renovation, Haring’s Classic Work Depicts the Artist Radiant baby, a common theme across canvases and subway walls throughout his meteoric but brief career. Haring died of AIDS-related complications at the age of 31 in 1990.

Angela and Scott Garner purchased the Haring family’s Victorian home in 2004, “and remember the seller was considering painting over the five-inch design,” a Rago/Wright press release read. An article by NPR reported that Angela is a social worker and Scott is a limo driver. Although the sprawling old house required some money and effort, the couple decided to jump on it when they learned that the legendary Haring had grown up there.

“I always thought it would be nice to have a repairman who had a great story,” Angela continued. Over twenty years living in the house, they have lined up all kinds of Keith Haring fans. “We had a pizza delivery guy come to the door, and as he handed me the pizza, I noticed he had a Keith Haring tattoo on his arm,” she told NPR.

Haring grew up in Kutztown and moved to Pittsburgh for college in 1978 – he had some early success, but decided not to be a commercial artist. Haring moved to New York later that year and studied at the School of Visual Arts. He became involved in the thriving downtown art scene alongside legends like Jean-Michel Basquiat and Kenny Scharf.

Haring “experimented with performance, video, installation and collage”, says his biography, but he is best known for his public works – chalk drawings on blank subway billboards (sometimes creating 40 a day ), but also his animated Spectacolor billboard in Times Square and his exclusive Pop Shop in SoHo where Haring sold toys, posters and more wearing the simple figures that united his practice, an effort to make his art more affordable and more accessible.

Some art dealers balked, but Andy Warhol loved it.

The Radiant baby recurs throughout Haring’s work to symbolize innocence, pure potential, and sometimes even the artist himself. Childlike wonder is the key ingredient to creative practice. Although this is a drawing of a baby in the artist’s childhood home, Haring did not make this one as a child. It’s a tag he left on a return visit to see his family, done “in blue and gold – a particularly rare color combination for Haring”.

Dr Christine Isabelle Oaklander, an art historian Mr Garner connected with through a chance encounter while driving an artist, adds: ‘It’s really a label [saying] that it’s Keith Haring’s bedroom… There’s literally nothing else like it.

Haring’s father has confirmed the authenticity of the drawing – his signed letter of authenticity will accompany the work during the sale, along with two posters of Haring from the late 1980s found in the bedroom closet and a cubbyhole that ‘Allen Haring built for his four children. Proceeds from this sale will likely benefit the Garners’ 18-year-old son’s college education.

“We are proud to present this first wall design featuring Haring’s iconic image of Radiant Baby,” Meredith Hilferty, Rago/Wright Director of Fine Art, told Maxim. “Amazingly preserved from its childhood home, it is a symbol of hope and joy.”

“We would be happy with that, but it has the potential to do so much more,” she told NPR.

Tallinn Architecture Biennale 2022 opens its doors to the public