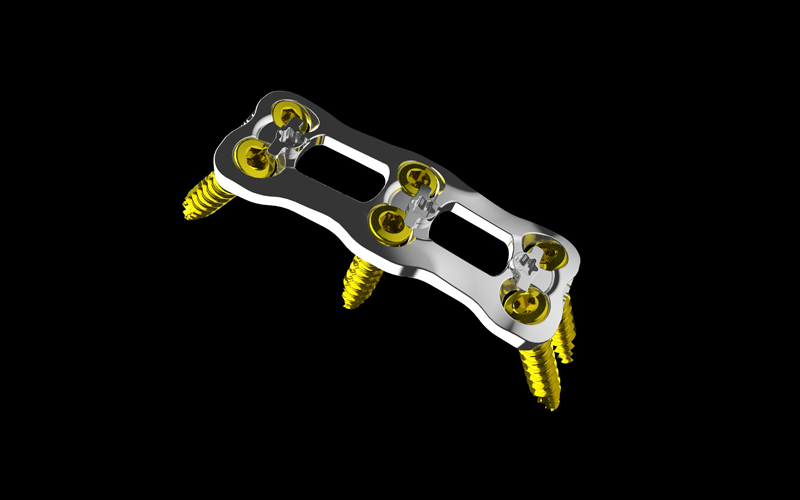 Called Quantum Titanium Cervical Plate System, the medical device is a small plate commonly used to provide stability to the spine after surgery.

By 3D printing their neck plate, Nvision and Watershed were able to leverage the design benefits of additive manufacturing, combining multiple smaller components into one monolithic part. According to the firms, this considerably reduces the risk of accidental dismantling of the device for a patient. Compared to a traditionally manufactured counterpart, the 3D printed Quantum Titanium Cervical Plate System also lends itself to lower manufacturing costs and faster delivery times.

Nvision Biomedical Technologies and Watershed Idea Foundry are sister companies operating under Fountainhead Investment Partners. They have already collaborated on other 3D printed medical products such as wedges and interference screws.

“It has been incredibly exciting for us to realize new product improvements made possible by additive manufacturing,” said Nick Cordaro, CEO of Watershed Idea Foundry. “Nvision’s willingness to champion additive manufacturing innovation in a commercial product makes this an ideal technology transfer scenario.”

What is an anterior cervical plate?

Developed in the 1980s, anterior cervical plates are applied to the front of the spine during surgery to protect bone grafts and ensure the integrity of the spinal construct as it heals. They were originally used in long cervical fusions, but are increasingly being used for anterior cervical decompression, fusion for cervical spondylosis, degenerative disc disease and scoliosis.

Conventionally manufactured neck plates tend to be quite expensive to produce and include several smaller components, which means they are at risk of falling apart if not fitted or screwed together correctly. The Quantum Titanium Cervical Plate System is designed to solve this problem.

The device’s most notable innovation is its monolithic nature, in which the screw-locking lid is 3D printed as a single structure. Since there are no multiple components or seals involved, the plate eliminates the risk of disassembly in service.

It also features two different surface finishes, with the rear surface being textured and the front surface being polished. The textured surface lends itself to osseointegration (bone fusion) while absorbing some of the load that would otherwise be on the screws. Additionally, some of the screw holes have been printed at 30º angles, a design choice that allows the plate itself to be shorter while still providing a solid grip on the spine.

Tom Zink, Senior Vice President of Product Development at Nvision, explains, “With the additive manufacturing of the Quantum system, we took advantage of design options that were not available with machined plates. The active locking system is fully printed in the plates, and therefore never assembled, which means that the locks cannot come apart in the surgical field.

One of the most important 3D printing applications in the healthcare industry is for implantable medical devices. Just recently, Health Canada, the government branch that deals with national health, approved its first 3D printed medical implant made in Canada. The 3D printed device is a customizable mandibular (lower jaw) plate intended for use in facial reconstructive surgery, primarily for patients with oral cancer. It can also be used in conjunction with surgical guides for cutting and drilling operations.