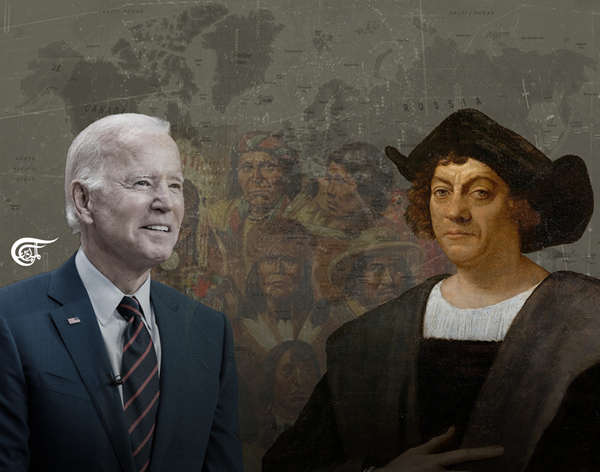 Native America: the United States kills its victim and attends his funeral

America’s crumbling global hegemony, built on the slaughter of indigenous nations and the enslavement of Africans, highlights the socio-cultural fabric that is being torn apart today.

In 2020, the population of Alaskan Indians and Native Americans was 9.7 million in the United States, according to the US Census, and 9.7 million fell prey to cultural and environmental genocide at the hands of Corporate America and of the United States government. More than 360 reservations are home to native tribes in nearly every state, ranging from the Navajo in Utah and the Oglala Sioux in South Dakota to the Western Shoshone in Nevada and the Kickapoo in Oklahoma. The majority of these so-called ‘homes’ are drastically lacking in access to clean water, sanitation, community services and adequate health care, all of which are on a list of violations of international human rights law. man by the same Uncle Sam government that lectures the world on the concept of democracy.

Columbus: the “hero of history” of the United States

The dawn of what once considered itself the world’s greatest power has not left the era of colonial weltanschauung behind, as it remains anchored in its name and intrinsic to its political DNA from administration to administration. another, and from one massacre to another. next – beginning as early as 1492.

Stemming from a history tarnished by the atrocities of America’s favorite “hero”, Christopher Columbus, the indigenous tribal nations of what was before North America endured land theft, rape, murder and torture in techniques ranging from slavery to a “land policy” leaving no human beings alive and no fertile land. Yet that was the surface. Centuries later, boarding schools were specifically designed for children in order to assimilate them culturally into the new Euro-Christian society Cultural assimilation was never conceived as a choice, but rather as an intrusion and mainly as an imposition.

Settlers built schools to strip Indian children of their identities, religions, languages, cultures and values ​​and turn them into proteges serving Washington’s needs. Unfortunately, hundreds and thousands of these children were murdered while attending these schools because they did not conform to these needs, and many of them are buried in unknown places and some under the schools today demolished today.

According to a U.S. Department of the Interior report in May, there are marked and unmarked burial sites at more than 50 locations, out of a total of more than 400 that made up the federal Indian boarding school system between 1819 and 1969.

The “discoverer” of what is now the United States, exploited the term Territory res nulliusLatin for “person’s territory”, to delineate the perimeters of the Doctrine of Discovery which stated that an uninhabited territory could be claimed as his own by anyone who discovered it.

Misusing the term’s definition and purpose, Columbus and those who followed in his footsteps used the term to justify why the land they set foot on was now theirs. The Doctrine is clearly and inherently driven by beliefs of racial and religious superiority – that which was not white-skinned or Euro-Christian, was not worthy of the right to self-determination. America was built on the sweat, tears and blood of a slaughtered people to be replaced by the toil, blood and tears of the enslaved people of Africa.

Approved Christian superiority leveraged the emergence of Manifest Destiny, America’s second bible that dealt with validating America’s expansion through Native America, which Euro-Americans considered it their mission, their destiny chosen and emanating from their superior nature. His rhetoric embodied an ethnological hierarchy: a view of warfare that validates all his tactics and methods, symbolizing a God-sent mission to embody a social order unprecedented for other states and nations, just as the United States strives still today. The expansion of American forces first in North America, then later in Asia such as Afghanistan and Iraq, and in Central American countries such as Nicaragua and El Salvador, was prompted by the jingoist philosophy from Manifest Destiny.

To understand the how and why of US imperialist policies today, it is essential to trace the origins of this jingoist philosophy and its implications. It carried the Monroe Doctrine of 1823 which declared the end of European affairs in the Western Hemisphere and the beginning of American imperialism in the region and the Sykes-Picot Agreement of 1916 after the fallout of the Ottoman Empire and the division of the Middle East between the European powers. . This is not to review a relevant course of history, but to demonstrate the invariable trait etched in the nature of Western hegemony, politics and law. The American assaults in Iraq, Syria, Lebanon, Afghanistan and Yemen illustrate the application of the “us and them” formula inherited from its European ancestors.

Resurrecting neo-caudillismo in the age of Biden

The United States has been signing its own death warrant, bringing down its hegemonic world order, for the past few years, beginning with the brutal and unlawful killings of African Americans at the hands of police – while the History repeats itself, but instead the age of cowboys ushered in the age of law enforcement. What pushes its downfall even further is the fact that the United States has thrown up any alibi to legitimize its actions as if it were not their doing – whether it is to accuse the African-American killings of suspicious activity, of invading Asian lands due to exporting democracy, of blaming the deaths of indigenous peoples on diseases brought by “coincidental” travelers.

In a nation that claims to be the model of vibrant democracy and equal human rights, demographic groups such as Latinos, African Americans, Pacific Islanders and Indigenous peoples bear the brunt of inequality, making facing greater repercussions parallel to the under-representation of their needs in legislatures and movements such as the women’s movement (now predominantly dominated by white liberals) that fail to consider Indigenous women and women of color.

While the Ukrainian government says “jump” with weapon packs and US President Joe Biden asks “how high?”, the latter seems to deliberately forget (as he does with things like how to leave a stage or call a dead legislator in a mob) on the damage of his own politics and those of his ancestors, his people and the rest of the world dragged deeper into mounting debt, food shortages and political failure and humiliation. And the first inhabitants of the United States? Suffering the hardest of these setbacks and doomed to be cast aside.

In light of the war in Ukraine that began in February, the United States refuses to deploy its troops to serve in the war in Ukraine, but packs and ships more than $15.2 billion worth of munitions, missiles HIMARS, weapons and military equipment. defense systems as long as the United States can play Ukraine like a puppet show. This ploy is not new, as military might and media dominance are US weaknesses – the only way to maintain the stranglehold on the Global South it still believes it depends on for survival in the Wild West world. .

Bills, like the one introduced in Texas in 2021 called SB3, seek to prohibit the inclusion of critical race theory and historic civil rights figures such as Martin Luther King Jr. and Cesar Chavez in classroom materials. classes – with the excuse of avoiding “ridiculous left-wing narratives”. Running away from responsibility is one thing, but covering up the systemic racism infested in an entire social foundation is another level of burying a history of imperial aggression and ‘bloodshed.

The Illusion of American Justice

America is digging its own grave

American law is nothing more than a placebo or the equivalent of a morphine injection, at the service of an institutional system which gives the illusion that justice is in favor of individuals deprived of human rights while that in reality it may just as well be lip service. Biden is playing devil’s advocate by not turning a blind eye to his country’s own crimes against humanity in the East, but by trying to preach to Russian President Vladimir Putin what they themselves do not practice.

In the aftermath of World War II, British Prime Minister David Lloyd George, French Prime Minister George Clemenceau and US President Woodrow Wilson met in 1919 at the Paris Peace Conference in Versailles, France after World War I world to configure the remodeling of borders following the fall of the Ottoman Empire. Along with Wilson’s famous fourteen points which gave rise to the term “self-determination” for the creation of new states, the last point carried the formation of the League of Nations as a coalition for international cooperation and the predecessor of what is the United Nations today. .

The United Nations, founded in 1945 by former President Franklin D. Roosevelt, claims to be the place where “nations can come together, discuss common problems, and find shared solutions that benefit all mankind.” Either way, America pays for America to play, which means that the United States not only controls what the UN does, but takes both the UN and the world on its game trail towards global destruction – all at the cost of democracy and human rights.

The United States is nothing more than the tombstone in the genocidal history of a nation that preaches democracy, human rights and individual liberty to the rest of the world. He only aspires to domination, seeing the values ​​of nature, humanity and culture with signs of money in his eyes.