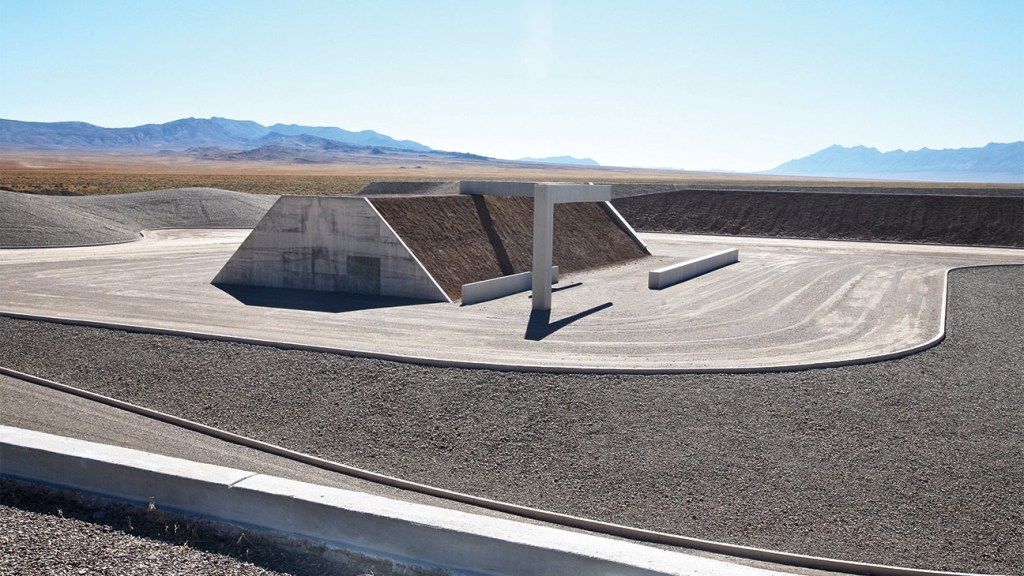 Michael Heizer’s Nevada Town, How to Visit the World’s Greatest Work of Art – The Hollywood Reporter

Only six visitors per day, according to the wishes of the artist, are authorized to visit the Town, Michael Heizer’s monumental earth sculpture in the Nevada desert, which finally opened to the public in September — after 50 years of construction. A mile and a half by a mile wide, it is called the largest piece of contemporary art ever created.

To arrive at Town is a pilgrimage; to see it, change life; to understand it, a form of mental sublimation, or so it has been said. Sign me up. On a cold Thursday in October, I drive about 90 miles to the dusty town of Alamo in southern Nevada, known for its location on the Extraterrestrial Highway and its proximity to the notorious Area 51 and the site of Nevada national security. There, I find a handful of fellow explorers, all from the Californian museum world.

On the main street of the Alamo, our group gathers around noon at the offices of the Triple Aught Foundation, a non-profit organization whose mission is to maintain the Town, which sits on land that was declared a national monument during the Obama administration through the work of the late Senator Harry Reid and was created on the ancestral territories of the Nuwu and Newe peoples. According to the foundation, the city occupies parcels of Bureau of Land Management land acquired by Heizer from individual landowners; Heizer’s family has lived in Nevada since the 1800s.

We soon pile into a large SUV and travel into the high desert of the Great Basin. After an hour the phones stop working. Thirty minutes later, around 2 p.m., we arrive at an unassuming door that our driver, a longtime Alamo resident, opens.

At first, there seems to be no trace of a town of any kind in the middle of the desolate terrain. Then, like a mirage, the Town appears – a metropolis built of geometric shapes, mounds and depressions made of compacted earth, rock and concrete. The Town is so big, everyone and everything is small. Shadows quickly cross the vast land as the sun casts deep to the west. Imagination fills in the gaps. The mountains of this city look like stacked horseshoes, its valleys like a pit of gladiators, its skyscrapers like Egyptian obelisks. The temperature also varies a lot; sometimes I get freezing cold, other times my legs get hot.

Our group was given a few guidelines: be back in three hours, stay hydrated, and don’t climb the sloping sculptures as they are regularly raked. I find myself looking for more rules. Is there a recommended path or method to explore? No, just figure it out as you go. I wonder, “Am I going the right way? Can I touch this? Can I sit there? Can I walk there? The silent and motionless desert does not answer these questions.

According to Kara Vander Weg, Senior Director of the Gagosian Gallery and Board Member of the Triple Aught Foundation, my every feeling is justified.

“There is no prescribed route,” says Vander Weg. “If I enter as a visitor, I arrive at the center of the project, I spend a moment orienting myself in a 360 degree view of the sculpture and then I choose to go in one direction or another. It can become a very winding route, depending on the time of day and the light. I tend to make a circular path around the whole sculpture. It is valuable to see how it stands out from the surrounding land. Inside the sculpture is so varied in terms of topography and has large open expanses – you have a great distance where you can see half a mile away. It’s so inspiring. It is sublime to see this sculpture open. But everyone has to find their own way.

She first visited the unfinished work in 2014 during a private viewing. “It’s not just a matter of sight, it’s a matter of sound, certainly when you walk in silence, crushed gravel in your footsteps, the smell of sagebrush depends on the time of year you’re there. It’s everything. It’s the air. It’s that whole-body experience,” says Vander Weg.

Exploring the vast work of art, I walked six and a half miles, and every path in the Town has become an abandonment to the unknown.

Heizer, who started the Town when he was 27 and who is now 78, has an additional and profound rule for visitors, given the world we live in now: no photographs. Vander Weg explains, “In the 50 years it took Heizer to build it, our experience of the world has been so dimmed by electronic devices that it’s almost more important to have that solitude.

The Triple Augh Foundation begins accepting reservations for the 2023 season on January 2, 2023, at tripleaughtfoundation.org. $150 per person, with a student rate of $100 per student and free (but with reservations still required) for residents of Lincoln, Nye, and White Pine counties in Nevada.

A version of this story first appeared in the Nov. 9 issue of The Hollywood Reporter magazine. Click here to subscribe.

Water Crisis Loans | The sun on the north side