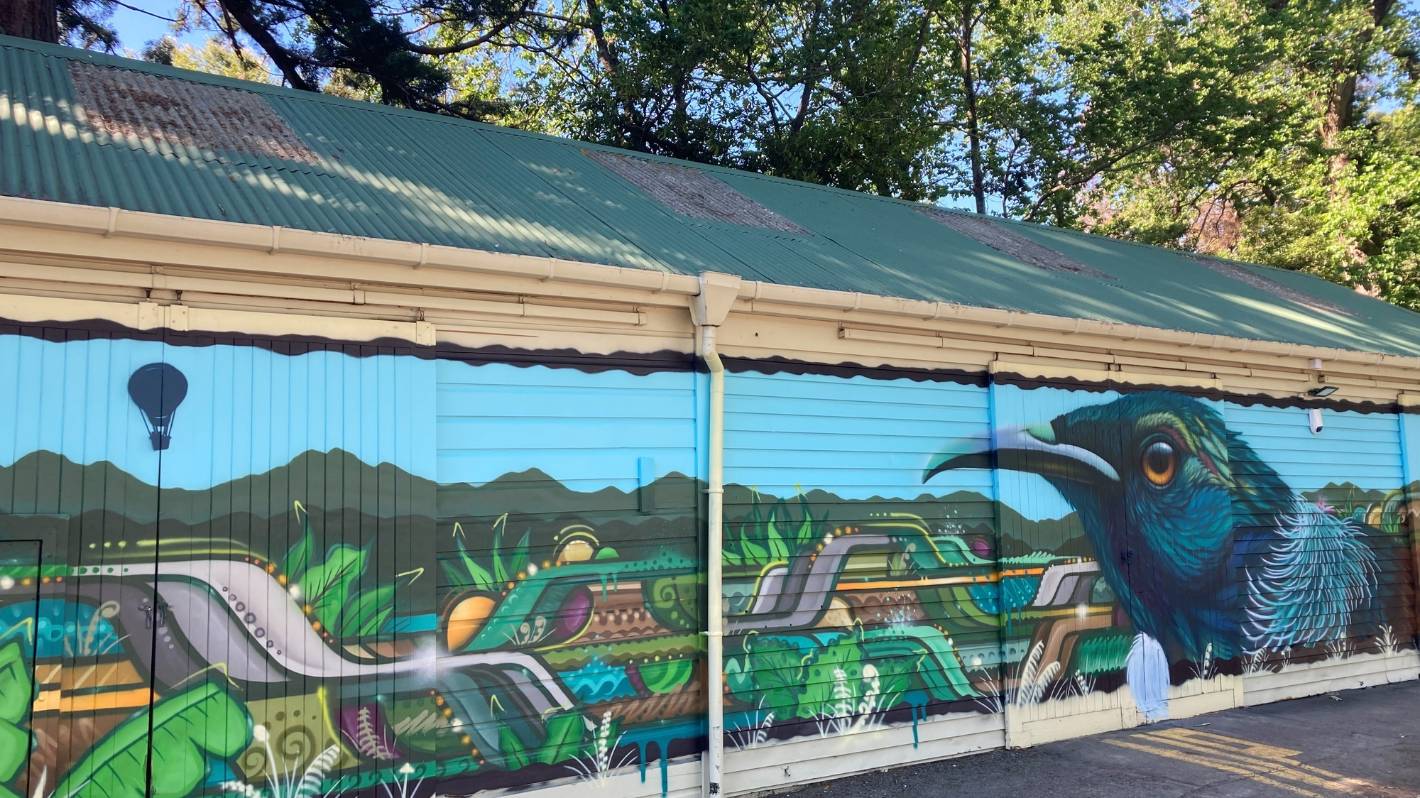 The natural world is an inspiration for Wellington-based muralist artist Sean Duffell, who has created his own symbolism to tell his stories.

He collaborated with fellow artist Swiftmantis to paint a large mural on the Lawn Manager’s Hangar in Queen Elizabeth Park in Masterton to showcase the area’s natural assets.

It depicts a tūī nestled within Duffell’s traditional organic pattern work with the surrounding Tararua ranges.

“We kept this bold graphic to grab people’s attention from the cricket pavilion, but also in great detail for more accurate visualization,” Duffell said.

Intricate patterns and shapes in “nature’s macromonders” have inspired many of his creations.

“Like all civilizations of the past that sought inspiration for their art, nature was key. I never wanted to borrow the symbology from other cultures, so I created my own symbols and patterns.

He said graffiti and street art were his starting point for working professionally as a graphic designer for a decade, which he described as “self-motivating art forms”.

“You cannot hesitate or doubt yourself during the process. This is decisive when you are faced with a giant wall to paint.

“My graphic design background has helped me when working with clients and negotiating a brief, so both disciplines have been extremely beneficial in sustaining a career for over eight years now. “

There were some well-recognizable characteristics in Duffell’s work, but he was always eager to challenge himself and expand his range of abilities.

“I always go into new territories to stay excited, motivated and inspired. The Rita Angus “Rutu” wall at Bolton Hotel Wellington is the best example.

“A huge test of my ability to reproduce such an iconic painting on three floors.”

Duffell said his ultimate goal is for others to enjoy his work and he hopes it improves every environment.

“Our eyes are bombarded with enough publicity. We deserve something different in our spaces that really has a positive impact.

Masterton District Council spokesperson Steve Rendle said the park was one of the city’s best features and the mural added to people’s enjoyment.

“The historic grandstand looks great after the renovations and it made sense to spruce up the turf manager’s shed on the other side of the oval, which the grandstand overlooks.

“Hundreds of families come here every week to enjoy the playground, the green spaces and of course the renovated area around the Lake of Remembrance.”

Duffell was well known for his work all over New Zealand and he had another mural located in a shopping district in Masterton.

The council said it wanted to “give dynamism to the region”.