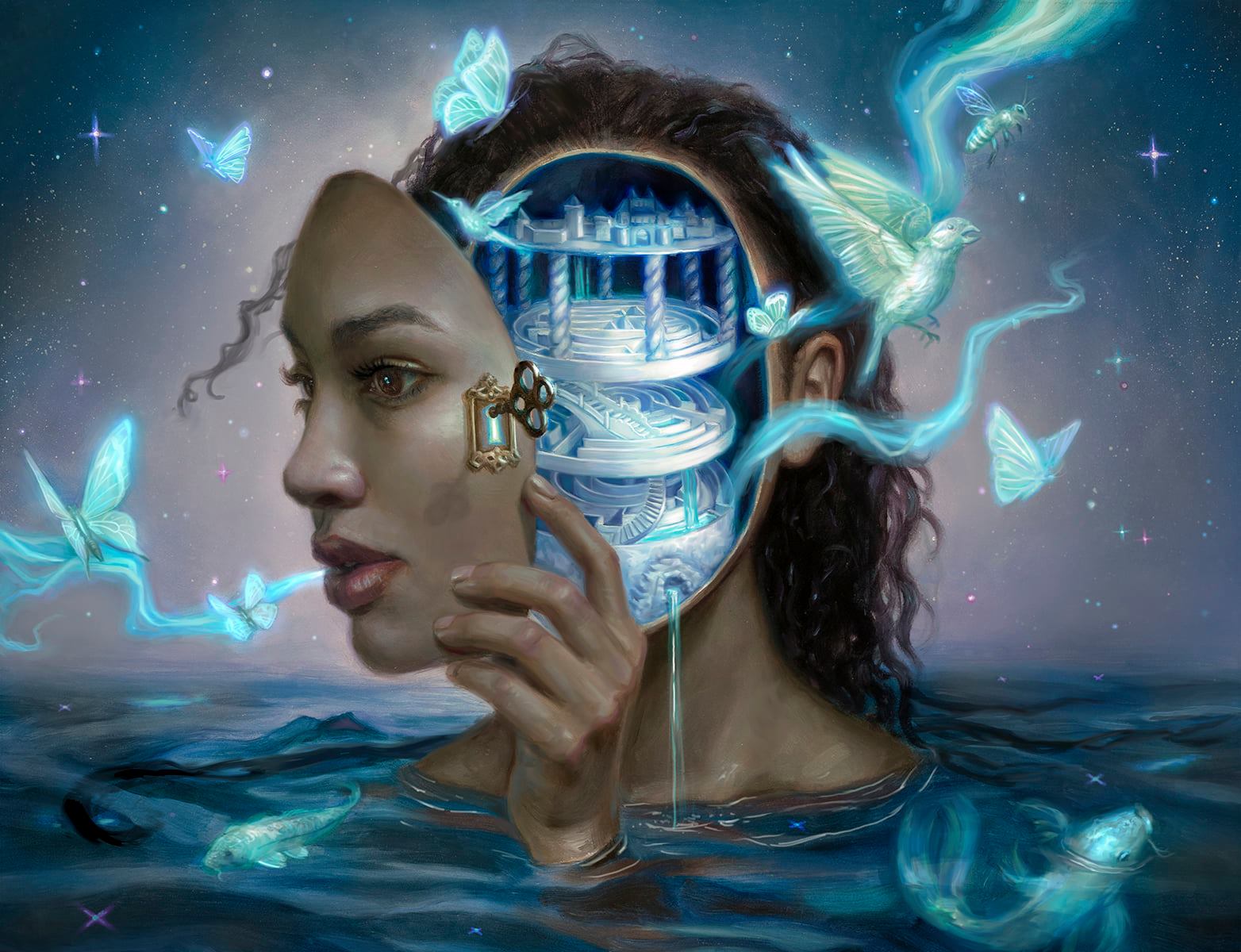 Hello friends and welcome to the penultimate day of the Hipsters 10th anniversary celebration, here in the Mirror Gallery. You did notice the framework of the Top 10 lists: some serious, some hysterical, and some just left field (yes, I did), and I thought it appropriate to continue that in my column. usual.

My regular Grand Art Tour readers know that I rarely, if ever, use the term “best” when discussing a Magic paint in a larger group of artworks. Although I am a firm believer in the idea that taste is subjective and quality is not, I find it disruptive to the larger discussion of magical art to try to codify which work is better, or whether A is better than B, etc. prefer to do is draw your attention to the paintings I think you need to see and why you need to see them, and here I’ve chosen one piece of art from each year Hipsters circulated the interwebs.

Are these the “best” paintings of that year? In many cases yes, but again it depends entirely on the definition you are using. Either way, it’s the paintings of the past decade that have had a significant impact in both Magic: The Gathering and the broader genre of Imaginative Realism. Among the winners of the competition such as the Chesley and gold spectrumto those who will be remembered through generations of gamers.

Here are the 10 best artworks you must see, Hipsters Anniversary Edition!

Ok, this first one is for me. The Izzet vs. Golgari Duel Decks were released the Friday before Hipsters published their first article, and were also one of the first products I purchased when I returned to Magic after a college break. The artwork you see above was the first imagination of the Izzet Signet Ring, and believe it or not hanging in my office. I watch it every day, and it’s a reminder of the endless possibilities we have in the world of MTG.

Teysa, Emissary of Ghosts was Karla Ortiz’s very first Magic: The Gathering illustration. If you ever hear her speak at a convention, she’ll tell the story of everything that’s happened since she was inspired by Brom’s angel of desolation accidentally being weeks late on the deadline. She is now a living legend in the wider fantasy and concept art community, but will always hold a very special place in the art of magic.

It is one of the works that elevated Chris Rahn to the level to which we see him today; his appointment to the Chesleys the following year was certainly no coincidence. The artist’s penchant for capturing light and dynamic composition is fully realized in Steadfast Ajanihis very first Planeswalker, and began a long tradition of excellence that we still see growing today.

2015: Fruit of the First Tree by Ryan Yee, Destiny Reforged

The first of consecutive MTG Chesley Awards for Ryan Yee, Fruit of the first tree is the quintessential example of an amazing piece of art on a map that you may have never seen. It surprises me every time I re-queue it, whether for an article or for my own research, and it really is a high note in the symphony that is Yee’s contribution to the game.

Matt Stewart’s Chesley-nominated Gepetto-esque Kaladesh artwork is a compilation of all the artist does best: incredible detail, beautiful and poignant lighting, and a cornucopia of emotion that emerges from this work as you look closer. master handyman is one of my favorites among its 200+ Magic pieces.

If there was ever a piece of Magic Online artwork that I would love to see printed on paper, this is it. The all-star reserve list received this new work in 2017 in digital-only form and won the Spectrum Gold Award the spring of the following year. Stasis was a major starting point in McKinnon’s career and remains a fan-favorite piece to this day.

This painting simultaneously captured the name of his map and embodied the nostalgia that was returning “home” to Dominaria for the first time in years. Syncopate is both an abstract and figurative masterpiece, so much so that I was compelled to write a feature article in 2018 right here on Hipsters of the Coast. It’s the only print I’ve hung in my office and one of the best pieces of Magic artwork of the past decade, both in form and function.

2019: Tolsimir, Wolf Friend by Ryan Pancoast, War of the Spark

I’ve written about this piece every chance I get in 2019. Tolsimir, friend of wolves was released as part of War of the Spark’s storyline crescendo and was an equal exclamation point in Ryan Pancoast’s continued upward trajectory as one of the finest living artists working today. I had the privilege of exhibiting it as part of the Whimsy, Wonder & War Magic Art Show, and will always remember seeing this masterpiece in person.

Lindsey Look’s Sublime Epiphany from Core Set 2021 won the latest iteration of the coveted Chesley Award in the “Gaming Related Illustration” group and joins a long tradition of magical artwork dominating the category in nominations and wins over the past decade. I picked this piece to win in my Chesley Critic’s Choice last year, and what I said then rings truer than ever. This piece is among those at the top, not just this year, but in the game’s thirty-year history, and is living proof of the beautiful outcome of letting an artist indulge in what he does best. .

I was pretty sure Sarah Finnigan’s artwork was something very special when it debuted during Kaldheim’s 2021 expansion, but when Yavimaya, cradle of growth appeared during Modern Horizon 2 that summer, I was sure. I saw this piece hanging alongside another of my favorites from her (Thran Portal), and she very quickly became one of the best landscape artists not only working today, but in the entire history of gaming.

There is still a lot of football left in 2022, with infinity, The Brothers War, and who knows what else in terms of the yet-to-be-released Secret Lair. Still, there’s been some outstanding artwork released in the last nine months, from names on this list (looking at you Pancoast), to names that will one day be on this list (you kill her Martina) , and names that should be on this list but I ran out of space (cheers, Victor). Discover the impossible, Tasha, the witch queenand Rith, Awakened Primitive could all claim this top spot, but a piece of art we haven’t seen yet could be too!

Magic: The Gathering commissions more fantastical artwork than any other entity in the world today, its artists are the best of the best, and we as players, fans, and collectors can enjoy age literal gold of fantasy on our tiny cardboard squares. How lucky are we to see all of this unfold.

I hope you enjoyed seeing these most important Magic: The Gathering artworks that have appeared over the past decade. From Spectrum Gold to Chesley Award winners, nominees, fan favorites, and early trainers, each of these pieces holds a special place in gaming history, genre history, and in many cases, the history of this column as well.

It’s Hipster’s 10th anniversary, and believe it or not, my fifth anniversary of writing this art column for the site is fast approaching. It seems like just yesterday I was pressing the buttons on Welcome to the Mirror Gallery, and I can’t thank Hipsters of the Coast enough for giving me the opportunity of a lifetime. I’ve only ever had unfettered support and maximum creative freedom, and I can honestly say I wouldn’t be the writer, person, and gamer that I am today without this website.

Happy 10th Anniversary, Hipsters. This is our next decade.

Donny Caltrider has been playing Magic since 2002 and collecting original Magic art since 2017. He has a Masters in Museum Studies from Johns Hopkins University and enjoys telling stories about art, objects, and intersection fantasy with real life. You can find it on Twitter talk about #mtgart, museums and other assets related to #vorthos. Follow us and continue the conversation!

Find out how Khloé Kardashian pulled out all the stops to celebrate her daughter True’s first day of pre-kindergarten: photos