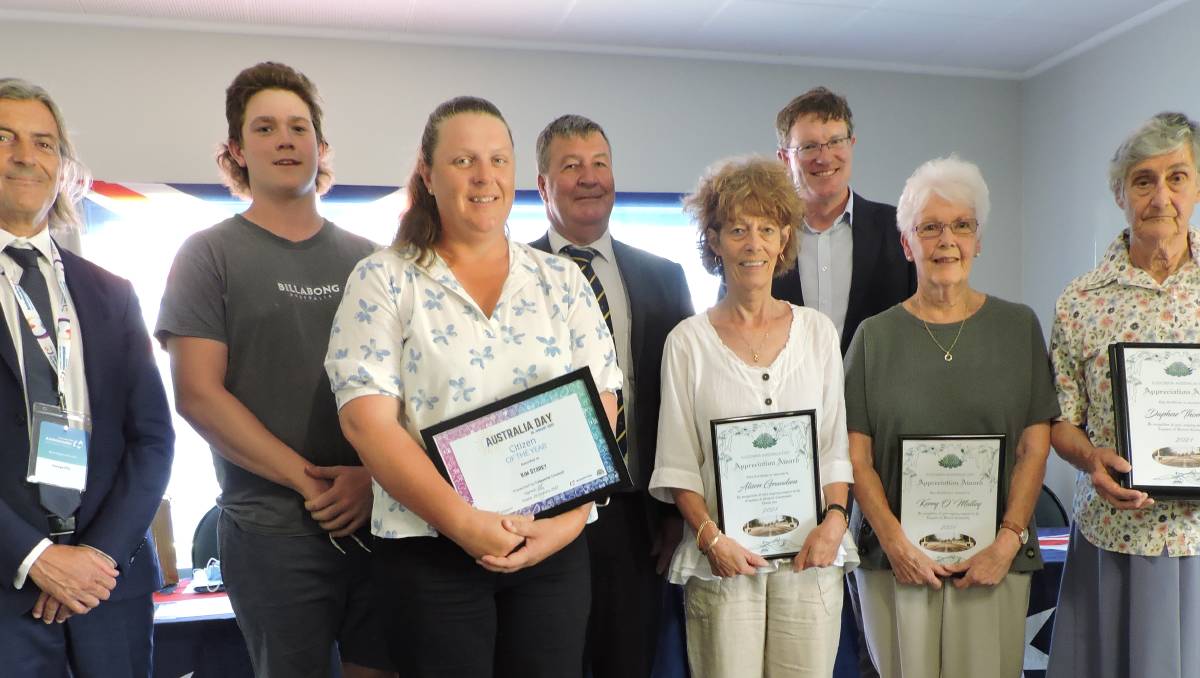 The air-conditioned comfort of the Eugowra Bowling Club was the venue for the Australia Day awards ceremony held last Wednesday.

The master of ceremonies for the event was Tony Toohey who welcomed everyone before calling Casey Jones to say welcome home.

He then asked everyone to rise for the raising of the flag (outside) and a splendid rendition of our national anthem by Cath Welsh.

The program began with Abbie and Esther reciting the Australia Day Prayer.

Mayor Cr Kevin Beatty introduced Mr. Ellis before inviting him to speak. Mr. Ellis gave a very interesting account of his life and how he settled in Australia.

Youth Ambassador Claire Wright gave an in-depth report on when she was a member of the National Youth Science Forum in Canberra, a program which was meant to educate Year 12 students with a passion and interest in science and encourage them to continue in this field. Claire was one of 10 students accepted into the ten4ten leadership program in 2020. Andrew Gee MP was her mentor during this time.

This year’s winners are:

Daphne Thompson – Daphne is a former local resident farmer, now (supposedly) retired in town. She is married to Frank, mother of four and grandmother of five. Very passionate local historian from a number of early pioneer families. Committee member and volunteer at the Eugowra Historical Museum and the Bushranger Centre.

Daphne is Principal of Eugowra Anglican Church. She cooks and works with the catering group, one of the Palm Sunday cross makers for which Eugowra is well known.

She is also a supporting member of the Red Cross, making and laying the ANZAC Day Wreath; and a member of the local hospital auxiliary who supports our residents in the multipurpose service.

Daphne became one of the coordinators and knitting enthusiast of the local group “Wraps with Love”; and also works with groups encouraging and caring for those exercising their abilities, including her beloved son, Ian.

Kerry O’Malley – Kerry was shortlisted for the Community Appreciation Certificate, specifically for her 27 years as Honorary Secretary of Eugowra Hospital Auxiliary. This role also includes compiling and posting draws for bi-annual street stalls.

Kerry continues to be actively involved with Craft on the Creek where she has been since the store’s inception and has held leadership positions; and works as a steward in the sewing section of the annual Eugowra show.

Kerry is a member of the Wraps with Love group who knit or crochet squares to make into blankets to provide warmth to those in need in Australia and overseas.

Kerry is a member of the Self Care Units Management Committee. During her professional career, she served as nurse manager at Eugowra Memorial Hospital where she was highly respected by both staff and patients.

Alison Gransden – Alison joined the Volunteer Ambulance Service 11 years ago this year; and for four years, has been carrying out her duties alone.

Without Alison’s service, we would not have an ambulance vehicle in Eugowra, and the response time would be longer.

A volunteer paramedic needs essential ongoing training. This is done monthly, which involves hands-on training and also assessments, and annual re-certification done over a full weekend.

This community thanks Alison for her time, knowledge and training. It is a generous commitment and a comfort to the residents of Eugowra.

Ambassador George Ellis, Claire Wright, Mayor Kevin Beatty and MP Andrew Gee with Bec Carver, Sienna Carver and Heidi Holland who represented the Eugowra Pony Club who won the event of the year with their Gymkkana.

Event of the year

The 2021 event of the year went to the Eugowra Pony Club Gymkhana held in March.

Seventy riders from the Central West gathered for the gymkhana, which includes jumping, dressage, ring events and athletic activities.

In total, the Pony Club brought together 150 people for the day. The club is run by a very small committee that does an incredible job.

The gymkhana requires hours of setting up jumps, organizing paperwork, and lots of other work. The award was accepted by Bec Carver, Sienna Carver and Heidi Holland.

Community Group of the Year

Wraps with Love is a voluntary group made up of 14 local women. They meet monthly to knit squares which are sewn together to make rugs. These mats are then distributed nationally and internationally for the needy. In 2021, 44 mats were produced.

Mavis Cross and Daphne Thompson accepted the award on behalf of the band. Mavis paid tribute to the late Helen Perry who started the group in 2000 with the ladies meeting at her house every Wednesday and when she provided afternoon tea. Mavis thinks they’ve done at least 784 since they started. The rugs are finished with a sewn in kangaroo to say made in Australia.

Young Citizen of the Year

Mackinley Den supports other local young people and the community with his helpful nature. He is also happy to help and will assist you where and when needed. He mows lawns for community members who cannot. He sets an example for other young people in the community.

Citizen of the Year

Kim Storey is recognized for her contributions to the Eugowra community and many of its organizations since moving to the area over six years ago.

Kim has been involved in many community organizations and held various roles including the Show Committee as Vice President and Chief Steward of the Photographic Section, Craft on the Creek, Eugowra Promotion and Progress Association and is the current treasurer as well as a founding member of the Eugowra Events and Tourism Association.

His initiative and commitment to the Eugowra community has resulted in the completion of a number of projects. Kim was also the driving force behind the creation of events.

Another project started by Kim was the book Eugowra Grow it, Cook it, Share it Cook to raise funds for the Eugowra Promotion & Progress Association and its projects.

Kim points out that she is one of many people working towards these results.

“None of this can happen without a bigger team of people,” Kim says.

“The community has been very welcoming, I didn’t know anyone when I came here.

“It’s a great place to live and a great community to be part of.”

As a successful author and photographer, Kim never misses an opportunity to promote Eugowra and the surrounding neighborhood.

Recipients of all awards made appropriate responses by accepting their certificates.

Tony then invited Jacko Barnes to present George with a gift from the Eugowra community. He also thanked Tony for taking on the duties of emcee.

Tony then congratulated the recipients on their awards and invited everyone to stay for afternoon tea.

Earlier in the day, the Eugowra Memorial Pool was the perfect place for the Australia Day BBQ, swimming and chalk art competitions for the kids. Claire Pengilly was the chalk art winner.

Proceeds from the $707 BBQ went to Headspace.

Submit a letter to the editor by completing the online form below.

Our reporters work hard to provide local, up-to-date news to the community. Here’s how you can access our trusted content:

We found, we love: 3D tiles