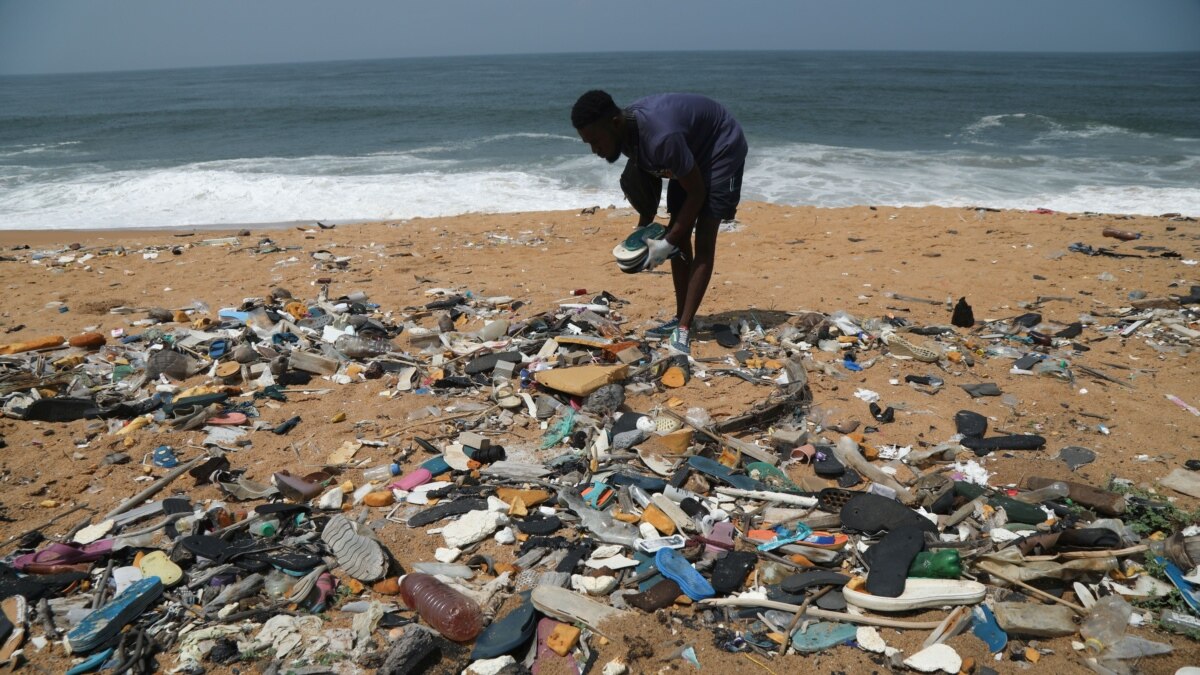 A man from Ivory Coast has found a creative way to reuse shoes that wash on the Beach – he transforms it into a work of art.

Aristide Kouame is a 26-year-old artist. But he says no one will know when they see him go around the beaches to pick up flip flops and other types of shoes. They probably think he collects the old items to sell on the streets.

But Kouame recognized the real value of such waste. He has created works of art from materials that can sell for up to $ 1,000. He cuts the rubber and plastic soles of shoes into pieces and uses them to create large collages.

“It’s the waste people threw it into the sea and the sea brings it back to us because it doesn’t want it, “Kouame told Reuters news agency. He was picking up equipment on a beach in Abidjan, the capital. economy of the Ivory Coast.

“I make art from used shoes … It’s a way of bringing life to objects that litter the beaches “, explained the artist.

Sitting on the ground of a narrow street, Kouame creates shapes, letters and faces with the pieces of rubber he has collected on the beach. He even makes his own paint by crushing the material into pieces to create a color pigment.

Its method is inexpensive and does not harm the environment.

Plastic and other waste, including large amounts of lost flip-flops, litter most of the beaches in West African cities. The waste is dumped in cities and transported to sea. But much of it ends up on the beach later.

His work has included large portraits civil rights and political leaders such as Nelson Mandela. Other pieces were created to draw attention to global issues, including climate change, COVID-19 and economic inequality.

One recent afternoon in a district in the south of Abidjan, several of Kouame’s works were exhibited in a gallery often visited by foreign art collectors.

The gallery director happily led visitors to three large collages. Each contained around 140 small portraits that Kouame created from scraps of flip-flops.

The United Nations estimates that around 13 million tonnes of plastic waste is dumped into the world’s oceans each year. Two of Africa’s largest waste producers, Ghana and Nigeria, share the same Atlantic coastal areas as the beach where Kouame seeks supplies.

For his part, Kouame says he intends to continue collecting and creating. “My goal is to get people to question their environment, in order to create a better life.”

I am Bryan Lynn.

We want to hear from you. Write to us in the Comments section, and visit our Facebook page.

Words in this story

Beach -not. an area covered with sand and small rocks next to the ocean or a lake

collage – not. a picture made by gluing small pieces of paper or other material to a surface

waste – not. things that are thrown away because they are no longer useful

litter – not. pieces of paper and other waste left in public places

pigment – not. a substance that gives color to something

Gallery – not. a room or building used to display paintings and other works of art to the public

portrait – not. a painting, drawing or photograph of a person