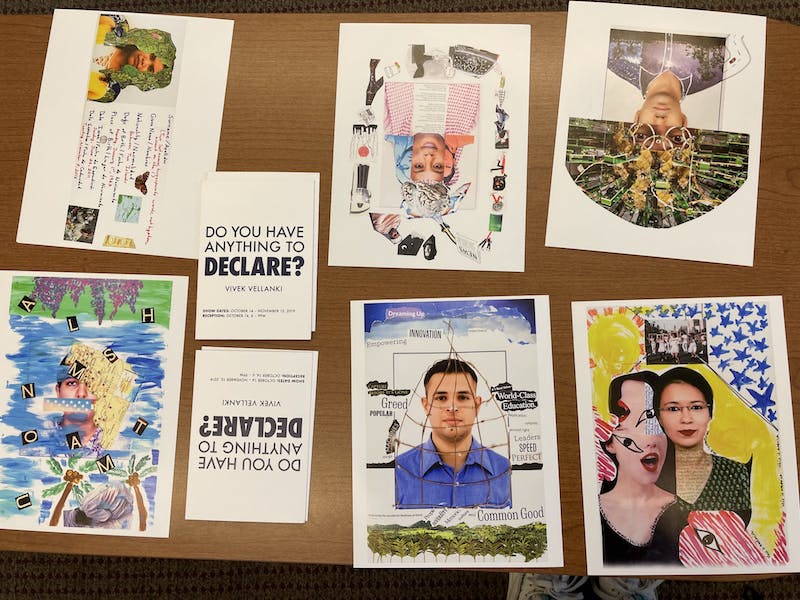 Six students came together to design large prints of their passport photos during the event. Each of the participants gathered on the floor of the Asian Cultural Center to cut and paste pictures from magazines, paint or write on the pictures. Vellanki challenged students to approach their designs with a question: “What do you want the world to know about you?” »

The inspiration for the Passport Photo Project – which began in 2018 – came from Vellanki’s 14-year interest in collecting passport photos. Vellanki has asked friends and family for their photos over the years. He said keeping passport photos of loved ones is common practice in India, where he is from. Vellanki said he was shocked that after collecting nearly 90 passport templates during the project, no images looked alike.

The project combined Vellanki’s interests in migration, identity and diaspora with the cultural significance of passport photos. Vellanki said he appreciates how collaborative the project can be for participants.

“What’s amazing is that people are talking to each other, talking to each other about what it means to be an immigrant, a refugee or an international student in this country,” Vellanki said. “Which are often stories of struggle. But there are also moments of joy that become understandable when you share that kind of identity and experience.

As this event welcomed anyone of Asian descent to celebrate Asian American and Pacific Islander Heritage Month, Vellanki said he felt it was essential that these events create spaces for students. refugees, immigrants and internationals.

“My dad’s family is from Hong Kong, then my mom’s family is white,” Wo said. “I talked about how that plays into my identity, just like those halves.”

Wo also decided to stick quotes from magazines on his photo, things like “Now is the time to start listening”, in reference to Asian voices. She also pasted the word “diaspora”.

“I thought ‘diaspora’ was interesting because I think something unique about the Asian American experience is that everyone has very different stories,” Wo said. “Everyone you talk to, their families have been here at different times.”

Junior IU Shazia Akhtar helped Vellanki organize the project. Akhtar attended a previous workshop and said the experience made her reflect on her identity as an international student at IU. Akhtar said she believes the university is unaware of the issues international students face.

“My experience at IU was very, very difficult,” Akhtar said. “I feel deeply hurt by IU because I feel like they made a lot of claims about being very supportive of international students, but they didn’t respond to those claims.”

Due to the difficulty of the transition, Akhtar said she was grateful that the project connected her with people who understood her identity. She appreciated that the workshop allowed students to explore how they see themselves.

“Passports have recently become an acceptable answer to the question, ‘Who are you?’ “said Akhtar. “I felt like there was finally a space that could almost be a home for me because everyone around me had similar experiences. They understood what I was saying without having to explain too much to me. It was just like a place where I could be myself.