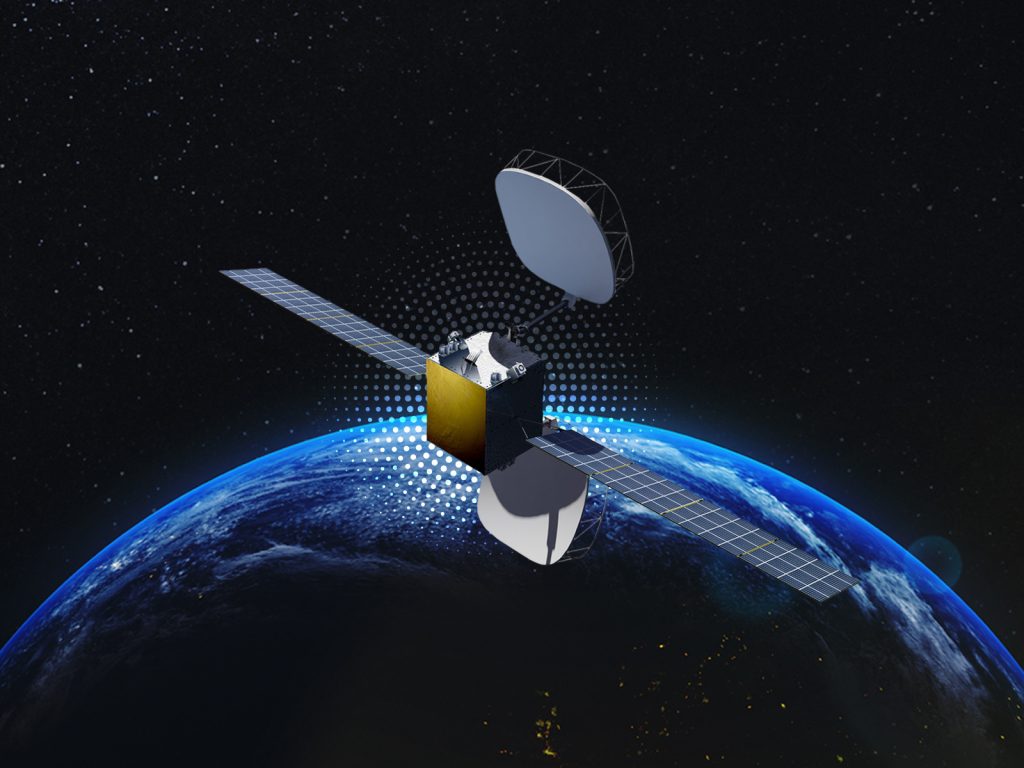 Intelsat has ordered a small 12-transponder mini-satellite from the Swiss manufacturer “SWISSto12” of its HummingSat spacecraft. It will be Intelsat-45 when it launches in 2025.

The HummingSat is one-tenth the size of a conventional geostationary satellite and contains many parts that will be 3D printed. Only about the size of a washing machine, it will still carry 12 Ku-band transponders and be placed in a normal geostationary orbit. It will weigh around 500 kg. At the moment, there is no specific target for its orbital slot which will be determined closer to its launch date.

“The SWISSto12 product brings two innovations to meet our business needs,” said Jean-Luc Froeliger, SVP of Space Systems, Intelsat. “The small size fills a gap in our fleet strategy, allowing us to be increasingly targeted to meet specific customer needs. Additionally, the additive manufacturing process used for this spacecraft paves the way for faster satellite construction cycles in the future. We are confident in HummingSat technology and want to support the success of new players in the field of commercial communication satellites.

HummingSats have a volume of just over a cubic meter, about one-tenth the size of conventional satellites placed in geostationary orbit. SWISSto12 develops the satellites in collaboration with the European Space Agency (ESA) as part of its public-private partnership program. Each HummingSat is designed to be launched as a rideshare mission on a rocket carrying one or more large spacecraft to a GEO transfer orbit. The new range of satellite products recently passed its system requirements review, assessed by a panel of ESA experts.

Dr. Emile de Rijk, Founder and CEO of SWISSto12, said: “The awarding of the IS-45 program by Intelsat is a significant moment for SWISSto12. We are honored to embark on this journey with Intelsat, who are the founding architects of satellite communications. It is unprecedented for a high-growth, specialized scale-up to secure such a large contract with a leading telecommunications operator. It provides a good start for our HummingSat product line to open a new chapter in the satellite communications industry.

Dr de Rijk added that the costs will be at least 3 times cheaper than more traditional orbiting satellites.

SWISSto12 is a leading manufacturer of payloads and advanced satellite systems, including the HummingSat: a small but powerful geostationary telecommunications satellite. The company’s satellites and payloads benefit from unique and patented 3D printing technologies and associated

Besides its space portfolio, the company is also active in telecommunications, surveillance and radar applications for the aeronautical industry. SWISSto12 has successfully expanded commercially in Europe, the United States and Israel and is the fastest growing Swiss aerospace company. SWISSto12, spun off in 2011 from the Ecole polytechnique fédérale de Lausanne (EPFL), is a private company supported by eminent Swiss and European investors.

‘Is it a Banksy?’ – framed illustrations lead to speculation, but clues suggest otherwise