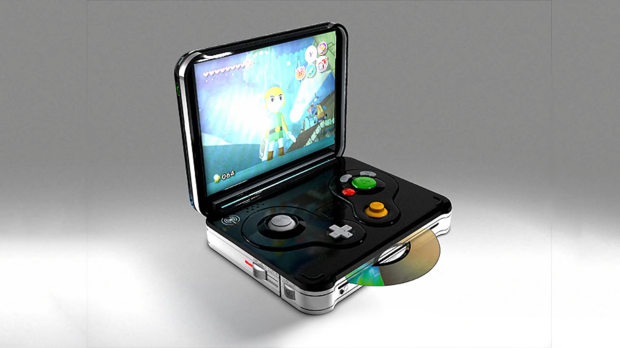 Electronics genius and hardware modder GingerOfOz has created a real working version of an outrageous old portable GameCube render from 2006. The original concept was a tiny GameCube the size of 4 Altoids boxes with a disc drive and a foldable clamshell screen. It was basically a render of a DS GameCube.

For fun, YouTuber GingerOfOz actually created an actual version of the concept. Utilizing a 480p display, a ton of 3D printed parts, an ultra-tuned Wii SoC, two 2000mAh batteries, a custom designed PCB, and a bunch of totally custom resin buttons made from 3D printed molds.

Playback is 100% perfect as the Wii is also a GameCube, but there are a few issues like battery life – it lasts less than an hour – and it’s a little hard to hold on to. But these concepts aren’t meant to be user-friendly…they’re meant to grab your attention and spark discussion.

The render was made by an artist named Demond, and GingerOfOz actually tracked him down and learned the origins of the render.

“I did it just for fun” said demon.

According to the story, Demond created the render while studying 3D design in Blend and 3DS Max. He then worked at game studios like Ubisoft, Epic, and Squanch Games and even created more handheld render designs like the slider PSP.