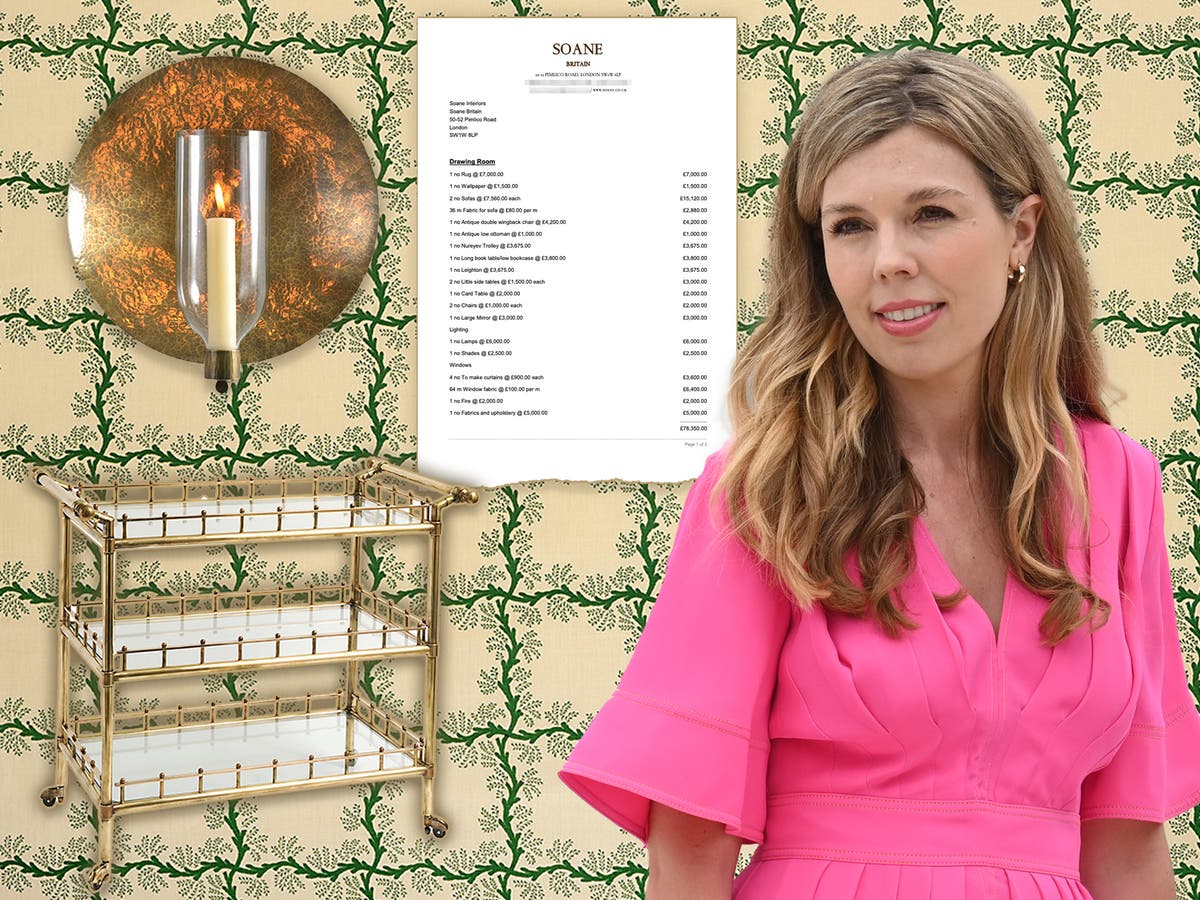 The full extent of the notorious Wallpapergate scandal, considered by some to herald the beginning of Boris Johnson’s downfall, has been revealed.

The Independent obtained a leaked copy of the invoice for the refurbishment of the Prime Minister’s Downing Street apartment, which shows it cost more than £200,000.

Items ordered by Mr Johnson and his wife Carrie from high-end interior designer Lulu Lytle include a £3,675 drinks trolley believed to resemble the one owned in Paris by ballet dancer Rudolph Nureyev and £2,260 ‘gold’ wallpaper that Mr Johnson privately complained his wife had bought.

The estimate for the building work, which involved sanding the floors, painting and decorating, and fitting new furniture and fittings, was £30,000.

The Cabinet Office leak will reopen the long-running controversy over the Johnsons’ luxury refurbishment of their flat at 11 Downing Street.

The £208,104 estimate was sent to the Cabinet Office in early 2020, which has an annual budget of £30,000 to refurbish the Prime Minister’s official Downing St apartment, in the early stages of work.

In fact, the rest of the cost was secretly funded by Lord Brownlow and the Conservative Party until the scandal was discovered and Mr Johnson was asked to pay it out of his own funds.

The leaked invoice shows the Johnsons ordered a £3,675 ‘Nureyev trolley’ which is said to be ‘modeled on a 1940s French drinks trolley owned by ballet dancer Rudolph Nureyev’.

The invoice disclosed in full:

The leaked invoice sent by Ms Lytle’s Soane Britain appears to suggest the Johnsons ordered a living room lamp for £6,000 with an additional £2,500 for the lampshade.

Although known as Wallpapergate, in fact, fabrics cost a lot more than wall hangings.

Of the wallpaper bill, the most expensive item was £2,260 for 10 rolls of ‘Espalier Square design’ used in the entrance hall.

According to the Soane Britain website, Ms Lytle ‘imagines this giving the overall effect of fruit trees to form tunnels and pergolas in a 19th century vegetable garden’.

Although described as ’emerald and stone’ in colour, the ‘Espalier’ wallpaper can appear gold in certain lighting and is said to have inspired Mr Johnson’s frustrated remark that his wife was ‘spending thousands on gold wallpaper’.

Mr Johnson was then forced to apologize in January for failing to disclose to his former Whitehall ethics adviser, Lord Geidt, the messages between him and Lord Brownlow, who contributed more than £50,000 to the makeover of the hotel ‘apartment.

Reporting on the refurbishment of the flat in May 2021, Lord Geidt said Johnson told him he was unaware Lord Brownlow had paid the money until media reports earlier that year.

However, a separate investigation by the Electoral Commission watchdog found that Mr Johnson had in fact messaged Lord Brownlow on WhatsApp about the redesign in November 2020.

Lord Geidt, who resigned from his post last month, criticized the Prime Minister for not disclosing the texts, but did not change his initial verdict that Mr Johnson had not breached the ministerial code.

In 2021 it emerged the cost of the refurbishment was being met by the Cabinet Office and re-invoiced to the Conservative Party. After the scandal emerged, the money was returned to Tory headquarters and Mr Johnson agreed to pay the bill, although it is unclear where he got the £178,000 needed once the Cabinet Office paid his share of £30,000.