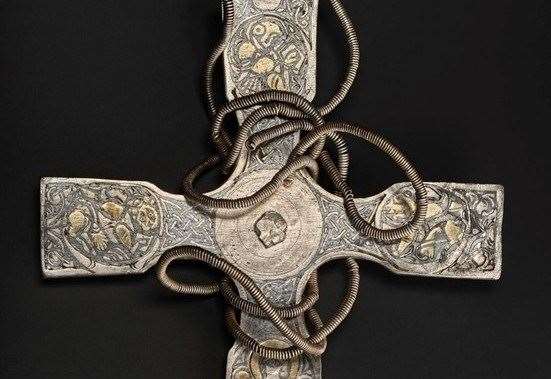 A Viking treasure is on display in the northeast

The richest collection of Viking artefacts ever discovered in the UK heads to the North East.

The Galloway Hoard is due to go on display at the Aberdeen Art Gallery on Saturday July 30 and will remain there for almost three months.

Buried around AD 900, the treasure is of international significance and transforms our understanding of this period in Scottish history.

It contains over 100 miscellaneous items, from silver, gold and treasures of jewelery to rarely preserved textiles, including wool, linen and Scotland’s earliest examples of silk.

The Galloway Hoard was discovered in 2014 and acquired by National Museums Scotland in 2017 with support from the National Heritage Memorial Fund, the Art Fund and the Scottish Government, as well as a major public fundraising campaign.

Since then, it has been the subject of extensive conservation and research, revealing the secrets of the treasure for the very first time.

In this free exhibition, visitors can experience intricate decoration never seen since the objects were buried over 1000 years ago, which was uncovered through cleaning and preservation.

Then they can dig deeper and examine the hidden details found in X-rays, CT scans and 3D models to explore what groundbreaking research and analysis has already told us about the treasure, and discover what future work could still do. discover about this unprecedented Viking era. to find.

Many objects are still being studied by a highly skilled team of some of the UK’s finest researchers and artists.

But they illustrate that the Vikings enjoyed trade with cultures around the world.

Dr Martin Goldberg, senior curator, medieval archeology and history at the National Museums Scotland, said a surprise came from the radiocarbon dating of the wool wrapping the vessel, which dates to 680-780 AD. Dr Goldberg added: “So the ship is from beyond Europe, potentially thousands of miles away, and the wool that wraps it predates the Viking Age, having over 100 or may -even being 200 years old at the time he was buried.

“While the real ship is still wrapped in 1,300 year old fabric safely stored in environmentally controlled stores for preservation and future research, it’s wonderful to be able to use 21st century technology in the exhibit to allow people to see what it looks like under those fragile textile wrappers.

Dr Goldberg said it is the “unique combination of familiar artifacts, exotic materials and exceptional preservation” that makes the Galloway Hoard a fascinating find.

Retired businessman and metal detectorist Derek McLennan discovered the treasure in 2014 while scanning an area of ​​church grounds in Dumfries and Galloway with two local ministers.

The search continues in the Galloway Hoard. The Arts and Humanities Research Council has given support to a three-year, £1 million research project, Unwrapping the Galloway Hoard, led by National Museums Scotland.

One of the most recognizable elements of the treasure is the pectoral cross.

After cleaning, the cross was revealed as a supreme example of a style of late Anglo-Saxon art known as the Trewhiddle style, named after a late 9th-century ironwork hoard from Cornwall. Its animal and vegetal forms are characteristic of this style.

The golden areas were used to spot important features such as the wings and the halos of the figures on the crossed arms.

Several items from the Galloway Hoard were made in the same style, including the gold bird pin and the silver disc brooches.

This use of figurative and naturalistic art differs from the largely abstract Viking-era decoration of the silver arm rings with which he was buried.

In each of the arms of the cross are the symbols of the four evangelists who wrote the New Testament gospels:

Saint Mark (on the right – the Winged Lion)

Parts of their bodies, and in Matthew’s case, his halo, are painted gold on a black and white background. The four symbols of the evangelists hold a book representing their gospel.

Each evangelist is framed in a roundel amid an intricate design of sprouting foliage.

The narrow, curved parts of the arms are filled with a tight interlacing pattern formed around the empty central circle, and the lion and winged ox look inward towards the missing central frame.

The lost line at the crossing of the arms may have once held a representation or symbol of Christ.

The free exhibition runs until October 23.

Do you want to react to this article ? If yes, click here to submit your thoughts and they may be published in print.